Hot on Friday; coastal showers increase over the weekend

We still have some pockets of drier air residing in the Coastal Bend this afternoon and along with mainly clear skies it was seasonably hot in our area.

The dry air, and upper-level support that brought the rain on Tuesday, is slowly drifting northeast and will take the dry air right along with it.  That means that humidity will slowly be on the rise, especially by Friday afternoon. 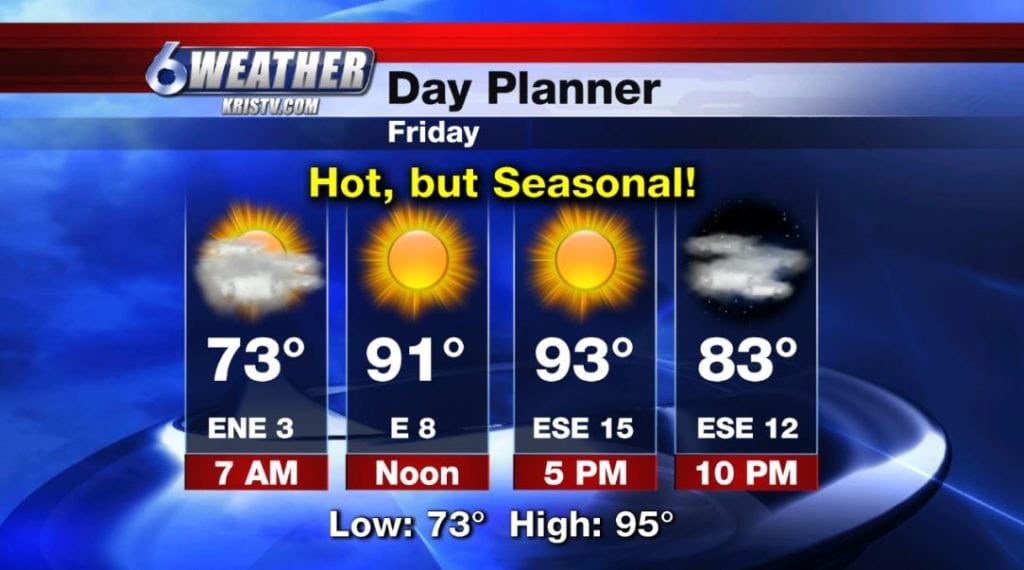 Tonight will be calm and tranquil with lows in the lower 70s again along with light and variable winds.  We got to 72 early this morning with upper 60s for some inland communities!  It’s August; it’s a rarity for that to happen!

Friday we’ll continue to have plenty of afternoon sun with seasonal highs in the middle 90s.  Winds will be a little on the breezy side around 10-15MPH out of the east-southeast.

There is a weak tropical wave in the Gulf that will start to move westward over the weekend and increase cloud coverage and humidity.  This will lead to some isolated, many coastal, showers for Saturday and Sunday.  Doesn’t look like a washout any day, but some areas could pick up a half inch of rain under some of the heavier showers that form.

Upper-level high pressure will also be building back from the west, but will have some weaknesses and enough to support the rain chances not only for the weekend, but early next week as well though more stray in nature.  The next couple of days the better chances for rain are along the coast and less inland.

By the middle of next week, the high really asserts its dominance and will start to dry us out again along with sending temperatures above normal.