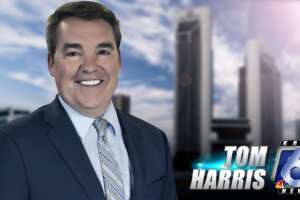 Tom Harris began his meteorology career in Corpus Christi in 1991. He has more than 20 years of experience forecasting the weather in some of the most volatile areas in the country.

However, the draw of the Coastal Bend has always brought him back to South Texas. He is both a meteorologist and an 8th grade science teacher at Hamlin Middle School. He is combining his passion for meteorology and teaching.

Tom also has extensive experience as an environmental reporter. He enjoys doing stories that take him outdoors. He has done numerous reports on alternative energy, climate change, artificial reefs and the Dead Zone in the Gulf of Mexico. He likes to go out and meet new people when reporting. He finds that is where the best stories come from.

In his free time, Tom can often be found at sporting events watching his Hamlin students compete. He says the best way to connect with students is to support the things that they care about. He has coached both golf and track at Hamlin Middle School.