SAN ANTONIO, TX (WOAI)- San Antonio police arrested a 20-year-old man accused of killing his girlfriend by running her over and then putting the car into reverse and backing over her.

Joshua Garcia is charged with murder in the death of Erin Castro, 19. The incident began early Sunday morning when Castro reportedly called her mother to say she had been stabbed in the neck. 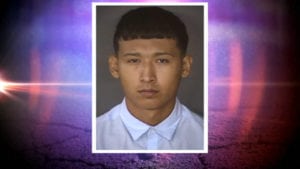 She identified her attacker as Garcia, her boyfriend, according to the mother. The mother stayed on the phone with her daughter until police found her along a dark stretch of Camp Bullis Road at around 2 a.m.

Police later went to Garcia’s home and took him, his mother, and his brother in for questioning.

According to court documents, Garcia’s mother told investigators that he admitted running over Castro. His brother said he witnessed the crime after Garcia called him out to meet him because he was having problems with Castro.

Garcia’s brother said he drove out to the location where he saw Garcia run over Castro, then put the car into reverse and run over her again before getting out and kicking her body, according to court papers. Garcia and his brother then drove home.

When police questioned Garcia, he claimed Castro assaulted him while he was driving and that he tried to remain calm. He then said he jumped into the car and ran over her because “he was scared of what would happen if she called the police,” the arrest papers stated.