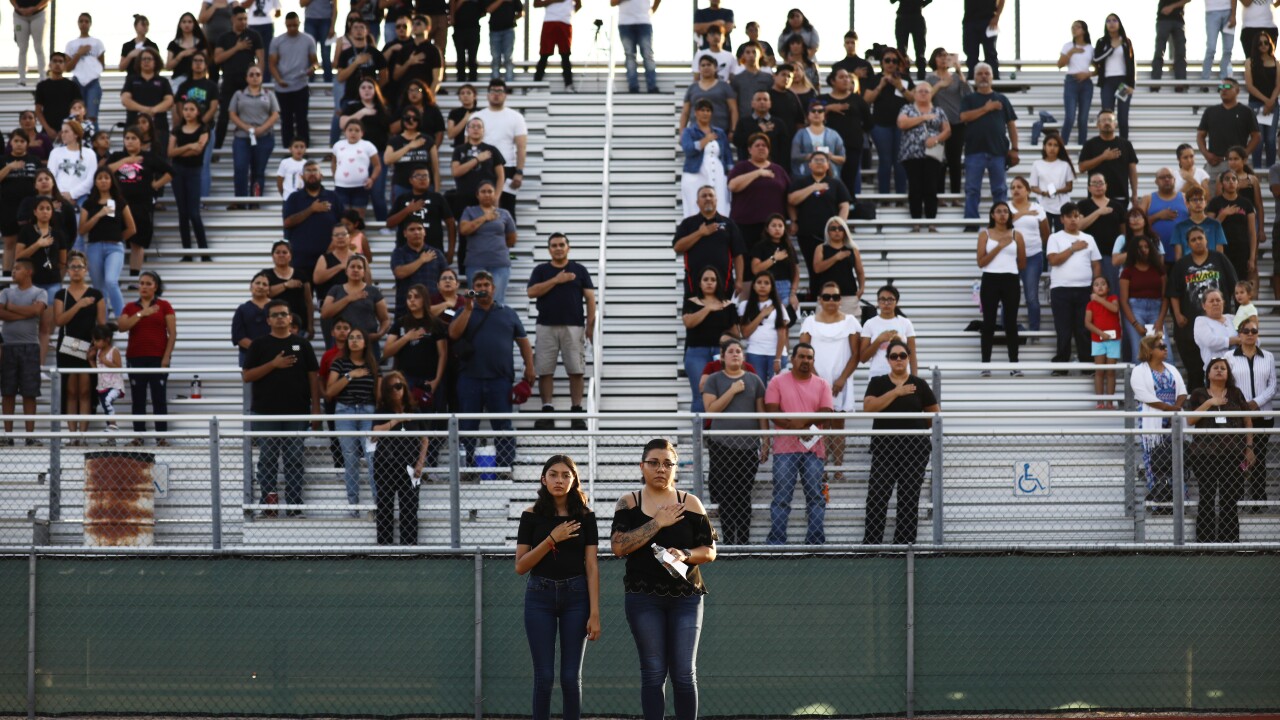 Mario Tama/Getty Images
The Plano Independent School District has canceled a Sept. 6 home game for Plano Senior High School against El Paso Eastwood in the wake of the Aug. 3 mass shooting at an El Paso Eastwood. The Plano superintendent was concerned the game would prompt political statements by extremist groups that would overshadow the game. (Photo by Mario Tama/Getty Images)

"After consulting with local law enforcement agencies, Plano ISD administrators felt obligated to prioritize the safety of the participating players, students, families and communities, and have concluded that the timing of the game falls too soon after the tragedy in El Paso," according to a release from the Plano Independent School District.

Eastwood's campus is located less than 3 miles from where the shooting occurred.

"We grieve with our neighbors in El Paso and are heartbroken that what is happening in society today is affecting our kids and our communities," Plano ISD Superintendent Sara Bonser said in the release. "Our students and coaches were eager for this opportunity to come together with Eastwood High to promote a message of compassion and healing, but what should be a celebratory event would be encumbered by safety concerns for the participants and fans of both teams. Our top priority must be the safety of all."

The Dallas Morning News reports the game wasn't canceled because there were credible threats surrounding the event, said David Tilley, a public information officer for the Plano Police Department.

"There were none, whatsoever, at all," he said.

But after Bonser expressed worries about the game to Plano police chief Greg Rushin that the game could potentially provide a platform to extremist political agendas to make their message bigger than the game. The police chief agreed with the superintendent's position.

"They decided to err on the side of caution," Tilley told the News. "The reward of playing this non-district game was not worth the risk of what could potentially take place."

The Ysleta School District in the El Paso area offered to host the game, or for it to be held at a neutral site. The Plano district rejected that idea.

That decision angered Ysleta trustee Kathryn Lucero, who told the El Paso Times that the El Paso community and its children already are suffering from pain and trauma from the Aug. 3 shooting. A football game, she said, would have added some normalcy to life in an otherwise difficult time.

“We don’t agree with the way this is being handled in Plano,” Lucero told the Times. “This is an opportunity for our districts to heal and be who we really are.

“It’s not fair to the kids, who just want to play football. It’s really unfortunate that the Plano district is unable to stand up to the fear.”

So what do you think? Should the game have been played? Or is the district wise to avoid a potential situation?