TSA Precheck vs Clear: Which Trusted Traveler Program is best for you?

TSA Precheck vs Clear: Which Trusted Traveler Program is best for you? 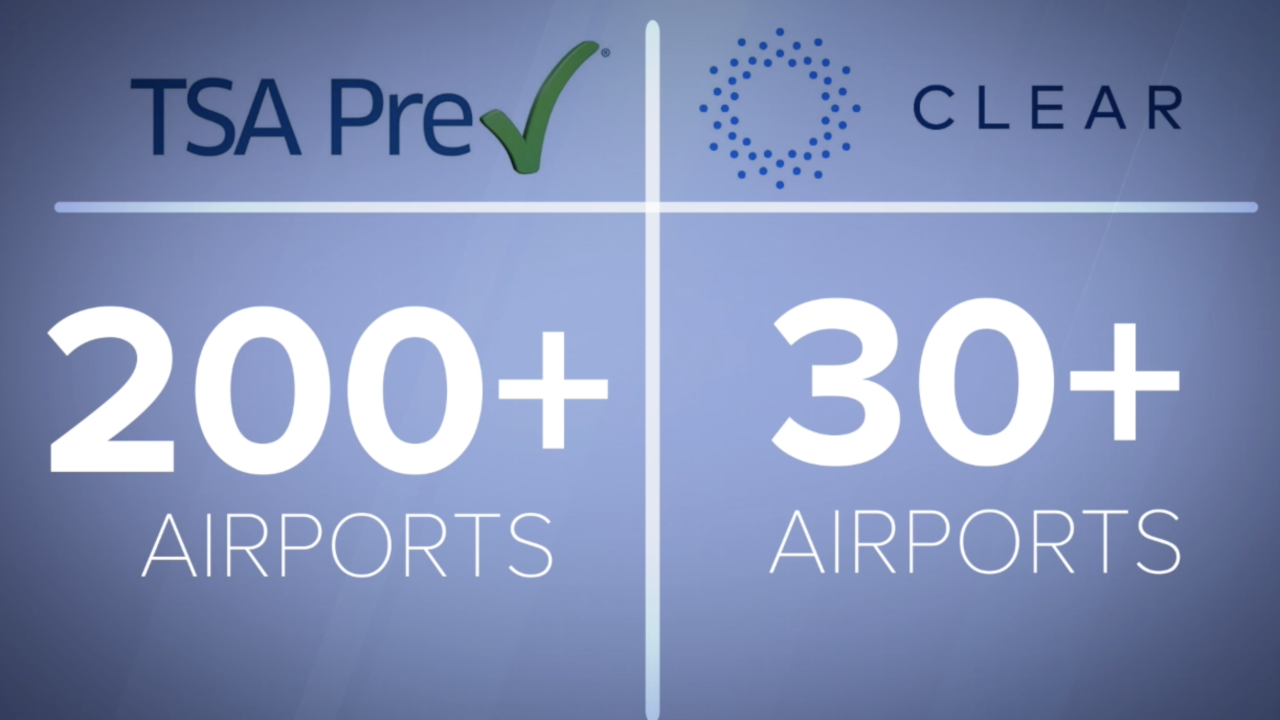 Waiting in line is a necessary fate of travel, especially when dealing with security at the airport. It's the reason Trusted Traveler Programs like TSA Precheck and Clear are gaining more traction.

"Cut lines. You know, time. Time is money, time is precious, and we need that," Clear customer Shavit Rootman says.

The benefit is a faster security process, which also leads to a larger number of what the airline industry calls "trusted travelers".

“What we're doing is providing a high level of security and certainty that the person that we're presenting is actually the person that they say they are," Clear Executive Vice President Howard Kass says.

But the convenience only comes if you're willing to give up some private information. A form of identification, a photo and a fingerprint are necessary to become a part of the system.

No need to be worried, though. Programs say your information isn't sold or shared, and it's well protected. When it comes down to it, the power is in your hands, whether you opt in or not.

"I don't really worry about the information side of it," says Craig Weller, a customer of both TSA Prechec and Clear. "I think most of that stuff is going to be tracked no matter what you do, so it's not that big of a deal to me, and I have nothing to hide."

So, what are these programs? International travelers are often familiar with Global Entry, Nexus and Sentri. Those fall under the control of Customs and Border Protection. But the most popular programs here in the U.S. are TSA Precheck and Clear. TSA Precheck is run by the federal government, and Clear is a private company that coordinates with airports across the country.

When taking a closer look at the details, TSA Precheck will cost you $85 for five years. That breaks down to $17 per year. Clear is $179 per year.

But before considering cost, it is important to know what each program offers. With TSA Precheck, you won't have to go through the traditional security process.

Clear, on the other hand, is a way to skip all lines, including the one at TSA Precheck.

"I got Clear because at this point there are so many people using TSA Precheck that sometimes the wait is just as long there," Weller said.

When it comes to availability, TSA Precheck is in more than 200 airports nationwide, and Clear is in 30. That may not sound like a lot, but travelers say it really depends where you're going.

"Clear… it's growing so it's in a lot of places, but it's still not in a lot of the places i travel to, so it would only help me here," TSA Precheck customer Mike Lutz says.

"Most of the major airports now have it. They've been growing I think quickly enough that most of the time it's available," Weller says.

How you join each program is also something to consider. For TSA Precheck, you need to make an appointment for an interview, but with Clear, you can do everything online.

"For Clear it's really easy. It's basically just online," Weller says. "You enter maybe a passport number or a social or something like that and it's almost instantaneous. With TSA Precheck there's an interview, you have to go to a border patrol place, and it's more of a process."

Aside from their differences, both TSA Precheck and Clear say the programs are designed to complement each other.

"I don't want to get to the airport two hours in advance just in case the line's terrible, and if I have Clear and TSA Precheck, I can always cut that window down to about half an hour in advance and still make my flight," Weller says.

Each of these programs has its perks. Clear will get you to the front of the security checkpoint faster, and TSA Precheck will get you through that checkpoint without the hassle of taking off your shoes. However, as more people sign up for precheck, those lines get longer as well, so if you're a frequent flyer and you believe "time is money," it may be worth it to sign up for both.