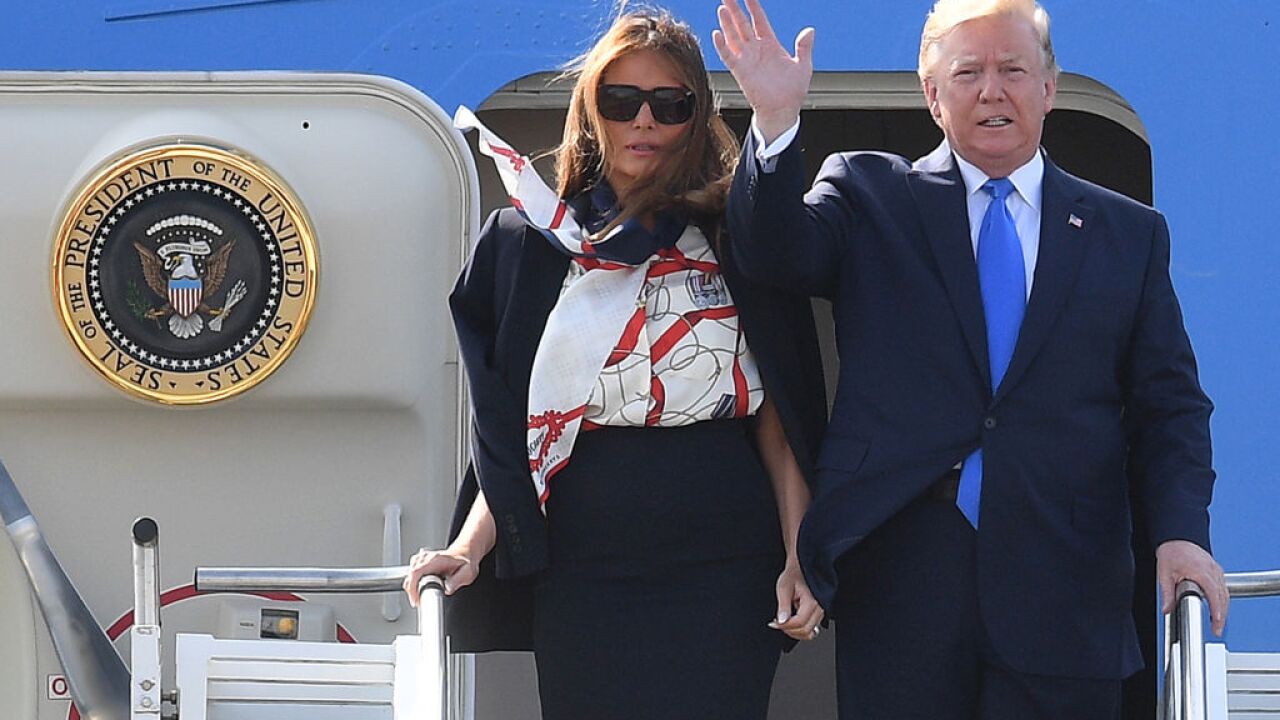 Trooping guards with bearskin hats, guns blasting at the Tower of London and a spot of afternoon tea launched President Donald Trump's long-awaited state visit to the United Kingdom on Monday.

The elaborate displays of hospitality did little to prevent Trump from dispatching insults over Twitter as he descended into London.

It was an appropriate start to a visit laced with controversy and steeped in tradition, delivered by a fractured nation for a hard-to-please guest.

"I think it'll be very important," Trump predicted as he departed the White House on Sunday evening. "It certainly will be very interesting."

Indeed, the dramatics began even before Air Force One had touched down at Stansted Airport outside London. As he was descending, the President tweeted an insult of London's mayor, calling Sadiq Khan a "stone cold loser" for being "foolishly 'nasty' to the visiting President of the United States."

Trump and Khan have engaged in a transatlantic spat over terrorism and security, and this week Khan called Trump "one of the most egregious examples of a growing global threat" in a newspaper op-ed . Khan had suggested Trump's state visit should be rescinded.

His suggestion went unheeded, and on Monday Trump arrived in the UK for a day of royal pageantry.

The regal display of British soft power, with Trump and Queen Elizabeth II at the center , comes as the country find itself questioning its very identity amid a debate over exiting the European Union. Trump, who has not held back in offering his own options on Brexit, arrives at a deeply difficult moment as the prime minister prepares to step aside.

If those bitter undercurrents can't completely disappear, however, they were at least a sideshow as Trump and his extended family arrive in London to the type of stately welcome perfected by British royals over centuries.

His first call was at Buckingham Palace, where the Queen welcomed the President in the gardens as a guard of honor marched past and gun salutes were fired in nearby Green Park and from the Tower.

Wearing a mint-green hat and jacket, the Queen smiled broadly as Trump greeted her after alighting from his Marine One helicopter. The future king, Prince Charles, was the first to welcome Trump as he stepped from the helicopter.

Later, the two men inspected a cordon of bearskin-hatted guardsmen, making small talk with the straight-faced beefeaters as they stood in the mild London sun.

Absent was a carriage ride down The Mall; protesters are expected to line the thoroughfare as Trump remains behind the palace gates.

He'll sit for lunch with the 93-year-old monarch, who he met for tea last summer (and awkwardly walked in front of during an troop-inspecting ceremony in the courtyard of Windsor Castle). She'll take him on a tour of the royal collection, where artifacts of significance to America will be on display.

Later it's on to afternoon tea with Prince Charles, who has ardently warned of climate change for years. Trump told an interviewer this week he'd welcome a conversation with the Prince of Wales about the environment, though his administration is rolling back policies meant to curb carbon emissions.

In the evening is the centerpiece of the visit -- a state banquet back at Buckingham Palace, where both the Queen and Trump will deliver toasts before a few hundred guests. Much of Britain's royal family is expected to take part in the visit, including Prince William, his wife Catherine, the Duchess of Cambridge, and Prince Harry.

Meghan Markle, the Duchess of Sussex, will not. She is on maternity leave after giving birth to her and Harry's first child last month. That is perhaps for the best; she had previously stated she would move to Canada if Trump was elected (she is American). Upon learning of those comments this week, Trump said he "didn't know that she was nasty," though went on to predict she would make a "very good" princess.

The invitation for a state visit was first offered more than two years ago, back when Prime Minister Theresa May's ill-fated destiny wasn't entirely clear and when Trump's pattern of insults and slights toward the United Kingdom had yet to develop.

In that span, the visit had been scheduled only to be canceled, with a stop in the UK last year downgraded to mere "working" status and organized to occur almost entirely outside London, where protesters flew a giant balloon depicting the President as a baby in a diaper.

The protesters, and the balloon, are back this week, and Trump will have a hard time avoiding them as he darts between royal engagements and meetings with May, one of her final acts before she steps aside as leader of her party next week.

Those talks will occur on Tuesday, and will include discussion of the Chinese tech giant Huawei, which the US is working to prevent from developing 5G networks in Europe and elsewhere. Trump will also host a breakfast of business leaders and another dinner, this one at the US ambassador's residence in Regent's Park.

Trump, who was largely gracious of May when she announced her decision, has since gone on to unfavorably characterize her handling of the Brexit muddle. He's showered praise on some of her political rivals: Boris Johnson, who once served in May's cabinet only to resign in protest, and Nigel Farage, a leader of the Brexit movement.

The White House has declined to say whether Trump will meet either Johnson or Farage while he's in London, though Trump told reporters before he left he'd like to see them. The British government said it had no information about a potential meeting, indicating what Trump did in his private time was up to him.

If the timing for Trump's visit seems inopportune, officials point to the fact he's in Europe marking the 75th anniversary of the Normandy landings alongside leaders of other nations who fought in the war.

"You can't really put off D-Day," one official said.