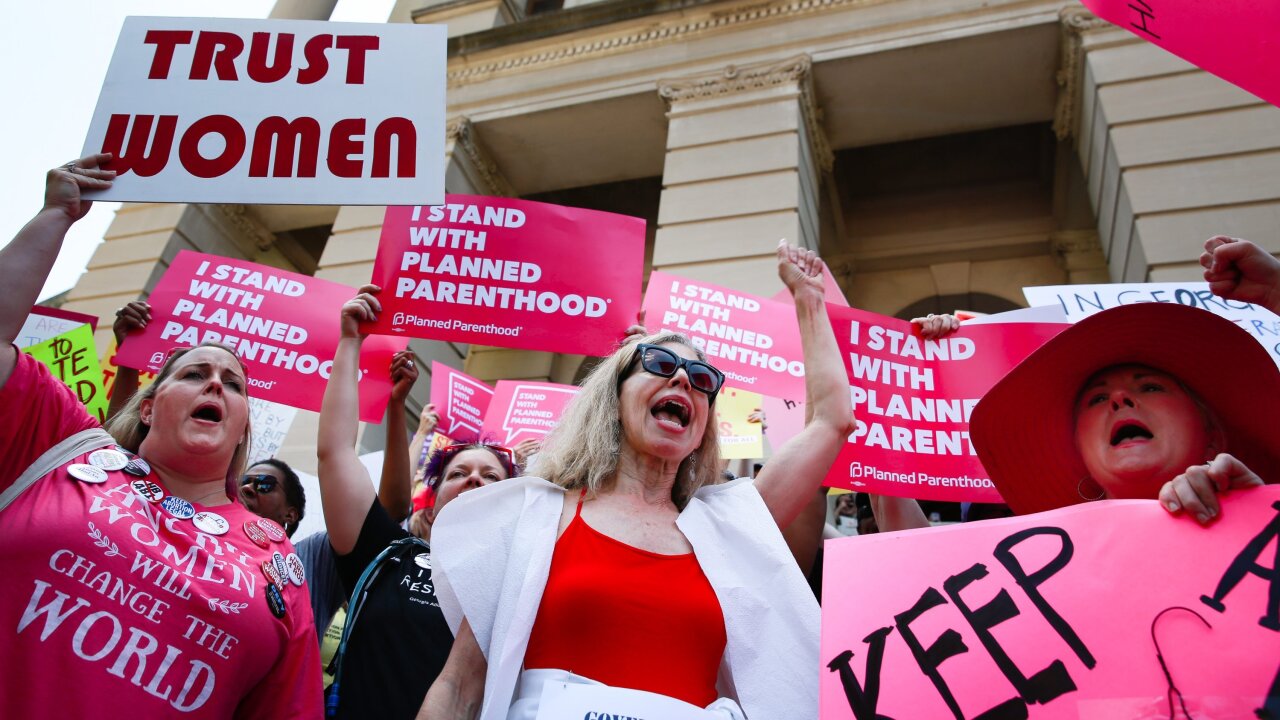 Louisiana lawmakers voted Wednesday to ban abortions once a fetal heartbeat is detectable -- as early as six weeks into a pregnancy -- with no exceptions for rape or incest.

Louisiana joins Mississippi , Ohio , Georgia , Kentucky and Missouri , which have all passed so-called "heartbeat" bills this year. Along with Alabama's near-total ban on abortion , the heartbeat bills are part of a conservative nationwide push to bring a Supreme Court challenge to the landmark 1973 Roe v. Wade ruling that legalized abortion in the US.

The Louisiana measure -- which Democratic Gov. John Bel Edwards says he will sign -- passed the state House in a 79-23 vote and would "prohibit the abortion of an unborn human being with a detectable heartbeat."

That can come as early as six weeks into a pregnancy, before many women know they are pregnant. The bill would require an ultrasound prior to an abortion and subject doctors who perform abortions after a heartbeat is detected with a $1,000 fine or up to two years in prison.

The bill does not make exceptions for instances of rape or incest. Democratic state Rep. Ted James introduced an amendment to include those exceptions, arguing that "we are not that important to make that decision for a woman who's been raped," but the move failed 35-67.

The bill would allow for abortions preventing a pregnant woman's death or "serious risk of the substantial and irreversible impairment of a major bodily function," and would require doctors who perform abortions under such circumstances to specify their eligibility in writing.

Abortions on "medically futile" fetuses that would not survive past birth are also not subject to the restrictions.

Edwards, who bills himself as "pro-life," said in a statement Wednesday that he will sign the bill, stating, "I have been true to my word and my beliefs on this issue." He added that it's his "sincere belief that being pro-life means more than just being pro-birth."

"I know there are many who feel just as strongly as I do on abortion and disagree with me -- and I respect their opinions," he said. "As I prepare to sign this bill, I call on the overwhelming bipartisan majority of legislators who voted for it to join me in continuing to build a better Louisiana that cares for the least among us and provides more opportunity for everyone."

The bill was introduced by Republican state Rep. Valarie Hodges, who called it "a very solemn responsibility."

"I'm proud to stand with this legislature and the state of Louisiana because we are very pro-life," she said.

Democratic state Rep. Patricia Smith accused legislators opposed to exemptions for rape and incest of making decisions for a "child who's carrying a child."

"How dare you tell a 9-year-old, a 10-year-old, an 11-year-old, a 12-year-old that they're supposed to carry a baby for an uncle, a father, a nephew or someone in their family that's taken advantage of them, how dare you," she said. "How dare you not allow a family to make decision for that child who's carrying a child."

Hodges responded that "while we have tremendous empathy" for victims of rape or incest, "if anyone should be put to death, it should be the perpetrator of the crime -- not the child, not the baby."

Republican state Rep. Julie Stokes referenced President Donald Trump's tweeted views on abortion in support of her proposed amendment to allow abortions for up to 10 weeks for rape and incest victims.

"Our President said that he is strongly pro-life with three exceptions: rape, incest and protecting the life of the mother -- the same position taken by Ronald Reagan," she said.

"We're committed to making sure this brazen attack on the constitutional right to abortion access never takes effect," she said in a statement.

When asked by CNN whether the Louisiana ACLU would mount a legal challenge to the bill should Edwards sign it as expected, Hebert pointed to the bill's stipulation that it would only be enforced should a federal appeals court uphold a similar Mississippi law and the ACLU's "nationwide fight" with existing lawsuits in Kentucky , Ohio and Alabama .

"The bottom line: the ACLU of Louisiana and our partners are committed to making sure women in Louisiana and across the country have access to safe, legal abortion care -- without punishment, shame or stigma," she said.

Companion legislation passed the state Senate earlier this month, and Edwards said at the time he would sign the bill if it lands on his desk.

"My position hasn't changed. In eight years in the Legislature, I was a pro-life legislator," Edwards told reporters during a press conference earlier this month. "When I ran for governor, I said that I was pro-life. And so that's something that's consistent."