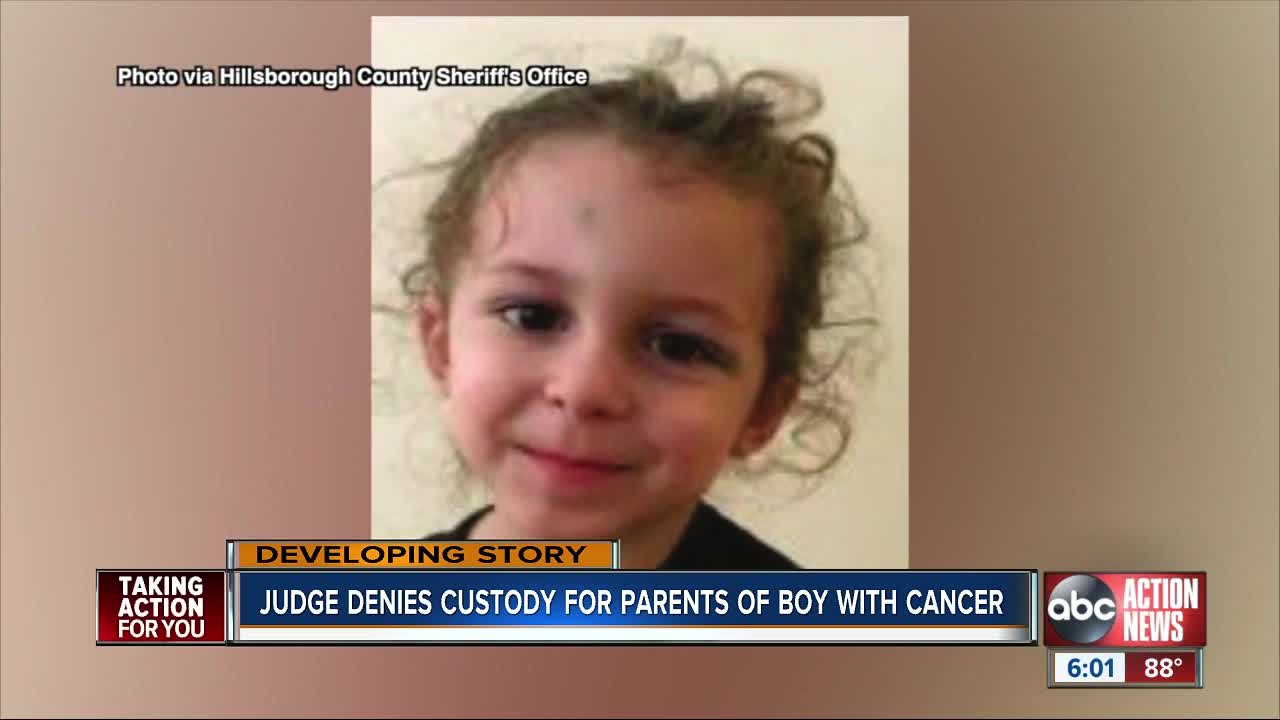 A Tampa Bay area family at the center of a national controversy will not be getting their 4-year-old son, who is battling leukemia, back into their home.

HILLSBOROUGH COUNTY, Fla. — A Florida family at the center of a national controversy will not be getting their 4-year-old son, who is battling leukemia, back into their home.

Noah McAdams was diagnosed with leukemia earlier this year. His parents, Joshua McAdams and Taylor Bland-Ball, refused to give him chemotherapy treatments.

The case sparked a nationwide search when the boy's parents took him out of Florida instead of going to the hospital for a chemotherapy treatment. Authorities eventually found the family in Kentucky where the couple said they were seeking a second opinion and looking for alternative health care options and natural remedies.

During Monday's hearing, Hillsborough County Unified Family Court Judge Thomas Palermo said the state successfully proved that McAdams is "an untimely threat to them because of his anger issues."

Palermo referenced a domestic violence incident involving McAdams from 2016, in which court records show McAdams threw a plastic bucket at Bland-Ball and hit Noah in the face, causing a minor cut. The charges were later dropped after a pre-trial diversion program, court records show.

Palermo also said McAdams and Bland-Ball both knew deputies were searching for them when they left their phones and abandoned their car ahead of their trip to Kentucky,

Noah also had what was called a PICC line, an intravenous catheter in his arm, which can be extremely dangerous to remove.

"(Bland-Ball) testified that she had no training on how to remove the PICC line. She explained during the trial that she was still comfortable removing it because she watched a YouTube video on how to do it," Palermo said in court. "She simply pulled the PICC line out of her son's body."

Palermo recommended that both parents get mental health evaluations.

Noah will remain in custody of his grandparents. The State of Florida will have the option to give McAdams and Bland-Ball custody in the future.

His parents' attorney said Noah is in remission.

This story was originally published on WFTS.