Furloughs will be canceled if lawmakers make deal

American Airlines said Wednesday evening that it was moving ahead with furloughs for 19,000 employees as CARES Act stimulus funds expire.

In a letter to employees, American Airlines CEO Doug Parker said the furloughs would begin Thursday.

"Despite enormous bipartisan support for an extension of the (Payroll Support Program), our elected officials have not been able to reach agreement on a COVID-19 relief package that would enable this extension," Parker wrote. "As a result, tomorrow, we will begin the difficult process of furloughing 19,000 of our hardworking and dedicated colleagues."

Parker added that he spoke with Treasury Sec. Steve Mnuchin on Wednesday, who told him that the White House is continuing to negotiate with House Speaker Nancy Pelosi on another COVID-19 stimulus package that would include further stimulus for the airline industry.

"Unfortunately, there is no guarantee that any of these efforts will come to fruition," Parker wrote. "However, in an effort to encourage cooperation and keep hope alive for our team, I informed the Secretary that if these efforts to extend PSP are successful over the next few days, we will reverse our furlough processes and recall any impacted team members."

Past by Congress and signed into law by President Donald Trump in March, the CARES Act included $25 billion in stimulus for the airline industry in March. However, payroll support included in that package expired Thursday, as did a provision that required airlines who took the funds to hold off on mass layoffs and furloughs.

In August, Delta Airlines also warned employees that furloughs and layoffs might be on the way if lawmakers could not pass another COVID-19 stimulus package. United Airlines announced Monday that it had reached an agreement with pilots to avoid furloughs through June 2021, but that pilots had agreed to reduce their working hours.

According to figures from the Transportation Security Administration, the agency is routinely screening more than a million fewer airline passengers every day than it would have at the same point a year ago — an indication that demand for air travel is still lagging amid the COVID-19 pandemic. 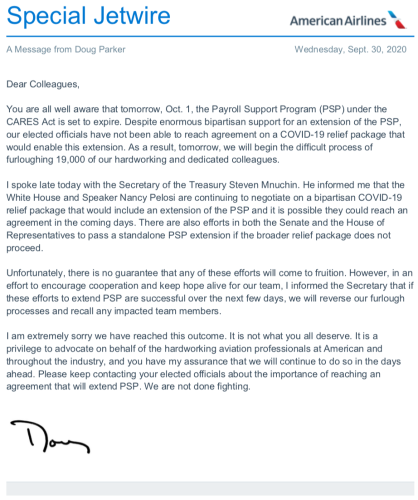