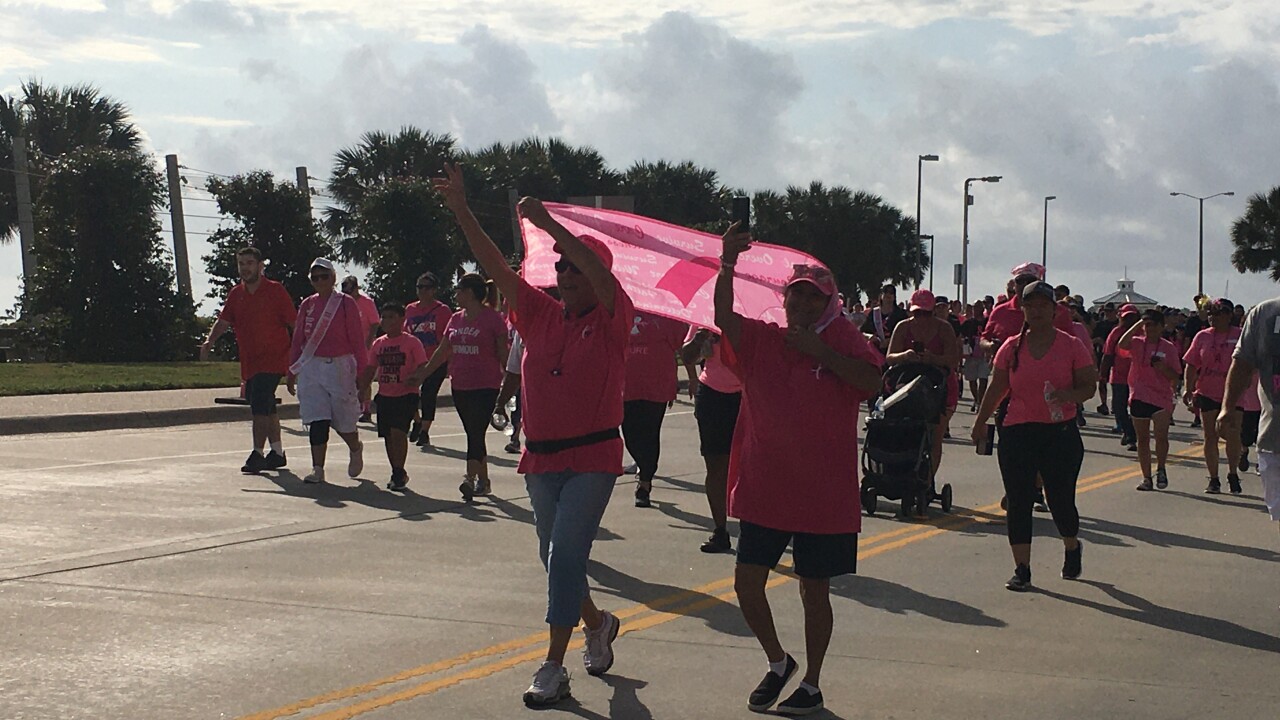 Ana Tamez
THe Making Strides Against Breast Cancer walk in Corpus Christi is co-hosted by the American Cancer Society and KRIS 6 News.

If you didn't get a high-five from KRIS 6 News reporter and Saturday anchor Greg Chandler at Saturday morning's Making Strides Against Breast Cancer walk, then I don't know what to tell you.

The man had both hands up, darting back and forth, working for his high fives.

Many walked in honor of those they have lost to, or are fighting, the disease that affects 1 in 8 American women during her lifetime. The disease is less common in, but also affects, men.

What would seemingly be a somber event was anything but.

Men, women, children and pets flooded Shoreline Boulevard in pink T-shirts, tutus, wigs, hair ribbons and face paint; dancing to the music and taking group pictures in the oversized inflatable chair. It was anything but sad.

It was a celebration. One of resilience, and strength and love.

"There were a lot of ladies that came by and said that they were two years cancer survivor, three years," said KRIS 6 News Chief Meteorologist Dale Nelson. "One lady had tears in her eyes, said she’s almost 10 years cancer-free. And you know that’s gotta be a relief to someone who has cancer."

Some peoples' experiences are bittersweet. Katia crossed the finish line with a woman who was walking by herself.

"She was walking by herself and she said she just lost her daughter this year to breast cancer," she said. "Last year they were here. And she was crying, because she remembered her daughter, obviously, being here, so … every story is different."

A team comprised of employees from the Cato store at Greenwood and SPID made sure to get a souvenir of the morning.

It took a few minutes for Kristin Tune, Valerie Medellin, Morhiah Nava, Yvette Garcia, Jennifer Lane, Caleb Lane, Mary Ojeda, Sarah Highhouse and Olivia Gomez to get situated on the oversized inflatable chair for a group shot, but they didn't seem to mind. What they wanted to make abundantly clear, was the store they were representing.

We're from the one on Greenwood, they said. Make sure you put that in.

Anavit Isidoro and Suzy Diaz from Bella Beauty College were woman-ing the "Pink Out" Tent, which made sure participants were as decked out as possible, adding ribbons, glitter and spray paint to hair, faces, and beards, respectively.

Twelve members of the Rodriguez family came out to support its matriarch, Elvira, who currently is fighting breast cancer.

The stories of hope are the ones that resonated with Dale.

"They’re living with the thought that they might get it again, but (they find out) that they’re cancer-free," he said. "And they’re so proud of the fact that they were able to beat this terrible disease. Those were, basically, the sentiments that were echoed by everybody that came by, whether it was a one-year cancer survivor or 10. I heard a lot of those stories, and they’re always nice to hear."

The event gives Katia even more for which to be thankful.

"It just gives us perspective on how blessed we are to be here and what a wonderful walk it is, to remember loved ones who have passed from cancer," Katia said. "So that’s why we’re here."