Kaelin fires back after NAACP calls for resignation Friday 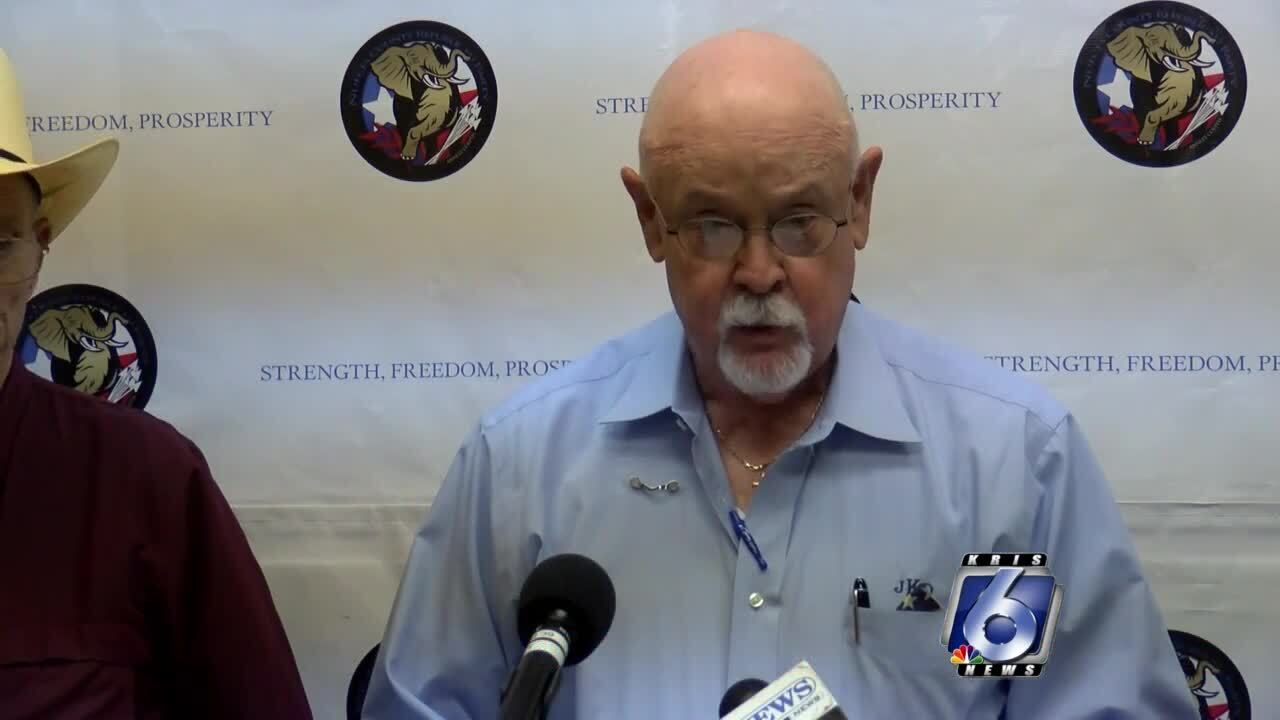 Nueces Co. Republican Party Chair Jim Kaelin responded to a hand-delivered letter Friday from the Corpus Christi chapter of the NAACP, which called for his removal as party head.

In it, Mills joined the Nueces Co. Democratic Party, the Black Democrats and Gov. Greg Abbott in calling for Kaelin's resignation, saying the post -- considered inflammatory by many local and state leaders -- shared by the former Nueces Co. Sheriff was inappropriate. Kaelin said the Texas State Republican Party Chairman James Dickey also has asked him to step down.

The calls for Kaelin's removal stems from a recent post he shared to his personal Facebook page about the circumstances surrounding George Floyd's death. The wording of the original post questions the circumstances surrounding the video in which Minneapolis police officer Derek Chavin's knee is seen on Floyd's neck during a May 25 arrest. It was uploaded to Kaelin's Facebook page May 29, and is no longer public on his page.

KRIS 6 News reached out to Mills for comment, but was told all he had to say is in the statement. Calls to Kaelin went straight to voicemail.

Kaelin argues in Friday's post that his intention never was to cause a stir.

"I found some of the question (sic) asked in the post worthy of sharing with others," he writes, although he doesn't specify which questions. "I had no idea it would go viral. This post does not question the murder of a black man by a white COP (sic). It does not in anyway justify the actions of the police in his death. . . . I did not write the post. I did not approve the information in this post. I did absolutely nothing wrong."

He also said he sees the criticism aimed at him over the original post as an infringement on his First Amendment rights. He invoked Refugio Independent School District's removal of "Dixie" as its fight song, the removal of "Gone With The Wind" from streaming services and Mark Twain's "Huckleberry Finn" being removed from school libraries as more of the same from his party rivals.

"So what has got their panties all in a wad?" he writes. "Well, it's (sic) all really boils down to our President, Donald Trump. I and thousands of other Republicans who stand in their way. Our local leaders fear that if they stand up to them for whatever reason someone will call them a racist? . . . Where will this madness end? If our leaders don't stand up now agains (sic) this lawlessness we are in trouble."

Mills called Kaelin's May post an "erroneous allegation that Trump and others within the Republican Party have been promoting to whitewash the heinous action of police officer Derek Chauvin" in his letter.

"The decision of Chairman Kaelin to repost this . . . indicates a lack of sensitivity and a serious breach of ethics and judgment," he said.

Gov. Greg Abbott told KRIS 6 News anchor Mike Gillaspia in a live interview on Wednesday that he sees Kaelin remaining in his role as improper.

"I think it is inappropriate for people who are spreading these completely false conspiracy theories, for them to be in positions of authority in our political parties," he said.

In his Friday night post, Kaelin says he and his family have been subject to "relentless attacks" recently, and blames the vitriol on local political rivals.

"As Chairman of the NCRP my family and I have become the targets of the local democrat (sic) party and most of the factions represented under their seal, 'the jackass,' " he wrote.

In several instances he refers to a Democratic Party "assault," and "attacks," on him, saying the group continues to "assault me with racist words and made up lies . . . all of it fake news which come (sic) right out of their playbook."

Kaelin remains adamant he will not resign from his post, and thanked Republican and conservatives for their support.

He said he would withstand the firestorm the original post created, taking his cues from the president.

"I have only been under attack for a week," he writes. "President Donald Trump has been under attack for 3 1/2 years. The attacks on him are neverending (sic) attacks. . . . Well, Mr. President, I stand with you. And like you, when the truth finally comes out they will eat crow. Either we take a stand now and fight for what is right or we surrender to the thugs running down our streets looting and burning everything in their path. I do not intend to, now will I raise the white flag of surrender. I will stand alone if need be and I will fight."