Corpus Christi Police are asking for the public’s help in identifying a man suspected of robbing two local convenience stores.

Police say in both robberies, the man displayed a weapon and was able to get away with an undisclosed amount of cash.

The suspect is described as a 30 to 40 year old white male, between 5 feet 7 inches and 5 feet 10 inches tall, with eye glasses and a mustache. He was wearing a black baseball cap, green long sleeved shirt, black pants and brown shoes. 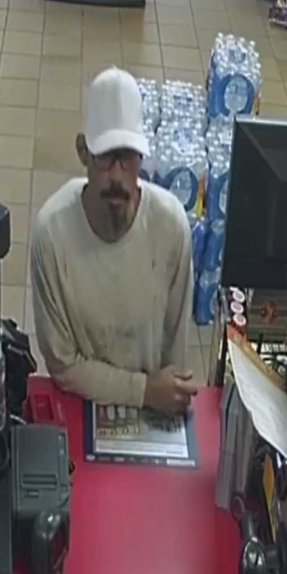 Police say the man was driving a late 1990’s to early 2000’s Chevrolet Silverado extended cab pickup truck with damage to the passenger side.

Police believe he may have been involved in at least one other convenience store robbery.

Anyone with information regarding this robbery suspect is asked to contact Crime Stoppers at 888-TIPS (8477) or online at www.888tips.com.

Information that leads to the suspects arrest could earn the  tipster up to $2,500.