A local priest has apologized for comments strongly critical of County Judge Barbara Canales’ support for the LGBTQ community.

The apology came from Father James Farfaglia of Our Lady of Guadalupe Catholic Church, who had taken to Facebook criticizing Canales for her support of the LGBTQ. Canales recently was named grand marshal of the upcoming 2019 PRIDE parade.

“I apologize for my Facebook comments,” Farfaglia said in comments released by the local diocese late Tuesday afternoon. “I consider Barbara to be a wonderful friend and I know that she is forward thinking regarding the growth and development of Nueces County and the city of Corpus Christi. She is a great advocate for the profound needs of the west side.

“I apologize to Bishop Michael Mulvey, to my brother priests, my parishioners and to the community. To those I have upset, I am sorry. I responded emotionally and with the wrong language about issues that I am passionate about. As a pastor and a public figure on the west side of our city, I promise to be more prudent. To those whom I have offended, please forgive me.” 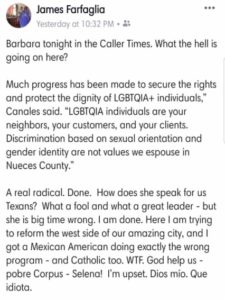 The Diocese of Corpus Christi had a strongly worded statement that was released at the same time as Farfaglia’s apology:

Statement of the Diocese of Corpus Christi:

“The Diocese of Corpus Christi has learned that Fr. James Farfaglia, a priest of the Diocese, had posted, on his private social media page, inappropriate comments concerning Judge Barbara Canales and other members of our community. It is our understanding that Fr. Farfaglia has offered Judge Canales and others his sincere apologies for his statements.

“The Diocese of Corpus Christi remains committed to the well-known moral principles, based on the natural law, concerning the human person and sexual relationships. At the same time, we are also firmly committed to the proper respect for the dignity of each human person, so that true and fruitful dialogue can always be present in our community.

“During this holiest week of the year for Christians, as we commemorate the passion, death, and resurrection of our Lord Jesus Christ, we continue to strongly urge all towards civility and compassion in all of our thoughts, words, and actions with one another.

Meanwhile, the Mosaic Project of South Texas, hosts of the 2019 PRIDE parade, say they appreciate Canales’ “support of equality, respect and dignity of LGBTQIA individuals.”

Here is a statement from the Mosaic Project of South Texas Board:

“The Mosaic Project of South Texas stands strongly behind County Judge Barbara Canales. We greatly appreciate her advocacy in support of equality, respect and dignity of LGBTQIA+ individuals. The purpose of PRIDE is to celebrate the inclusion of all people who contribute to the vitality of the Coastal Bend. In spite of being historically subjected to discrimination and bigotry, the LGBTQIA+ community continues to thrive.”

Judge Canales’ opposition to discrimination and support of inclusion is a beautiful example of God’s love of all people.

Local activists were planning to conduct a peace gathering this Sunday. which also happens to be Easter Sunday, outside of Our Lady of Guadalupe Catholic Church at 11 a.m. in response to Father Farfaglia’s comments.