Parents whose children aren’t attending school have been ordered to attend Parent Academy.

Judge Joe Benavides is hosting the annual academy at 6 p.m. Feb. 27 at the Nueces County Courthouse.

Benavides has issued letters to several parents, ordering them to attend the meeting. The judge will talk to them about the importance of an education and truancy laws. Also, several non-profits groups will be there to help parents with anything they need.

Benavides says when truants appear in his court, he looks for warnings or issues they may be facing. He hopes these non-profit groups can help students and their parents. 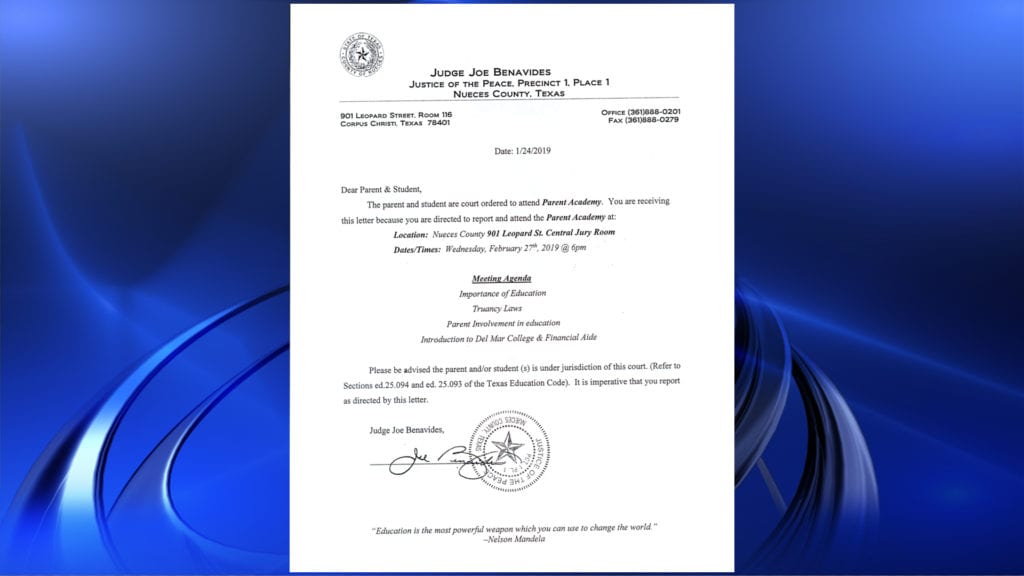 “Maybe it’s drugs. Maybe it’s peer pressure. Maybe it’s bullying. We’re trying to combat all that stuff and try to make sure the students know, look you have an avenue to go to. Go to the counselor. Go to the principal. There’s things that we can do to help you out so this does not happen.”

There are still major problems at the elementary level, Benavides said, adding that parents are not bringing their children to school.

“We just are trying to let the parents know, ‘look, you need to have your children in class on time.’  Talk about how to communicate from the parent to the school,” Benavides said. “But we have a lot from the elementary level and we’re trying to stop it.”

About 100 parents and their children have been ordered to attend.