Students at Brightwood College near Greenwood were left high and dry Wednesday afternoon.

What started as a normal day in class ended in confusion when students were told the school was closing.

One student told KRIS 6 News class lectures had begun and students were preparing to take a quiz when they were told to go on lunch break. When they returned, their teacher told them the school was closing its doors.

According to the school’s website, they award degrees in subjects like IT, legal studies, business and nursing.

Students and teachers there are now left with unanswered questions, financial burdens and uncertain futures.

Students said they are being given their transcripts with little additional information. Classmates are banding together to try to find a solution to where they will continue their education and receive their degrees now.

One nursing student at Brightwood College told KRIS 6 News she just recently took out a $29,000 loan for her tuition, and now that money is lost because she does not qualify for financial aid.

“We come in looking to better our lives. We have a plan and we’re going to get it going and it’s almost like you finally have it figured out, and then this news hits,” Yesenia Martinez said. “It just really leaves you lost and confused, like you don’t really know where to go from here.”

When KRIS 6 News tried to speak to someone in charge at Brightwood College, we were told nobody was available.

However, one student shared a letter with us given to her by Brightwood College. That letter states Tuesday night, the school learned the Accrediting Council for Independent Colleges and Schools had suspended Brightwood College’s accreditation. According to that written statement, Brightwood College plans to appeal that ruling. 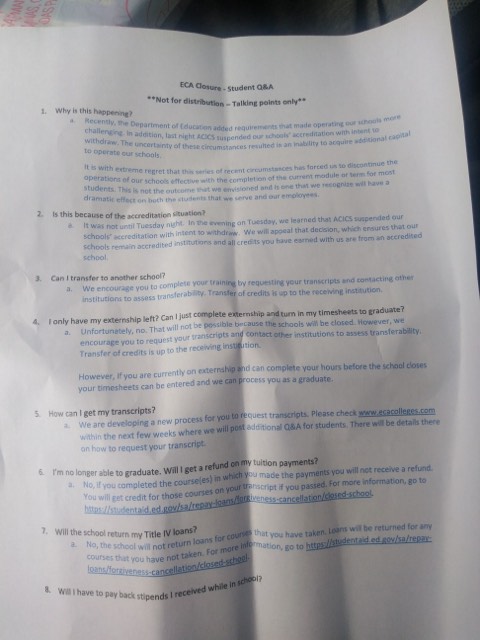 In response to the closure of Brightwood College, Del Mar College has arranged two special group advising sessions for students affected. Those meetings will be held Friday, December 7th at 9 a.m. and Monday, December 10th at 5:30 p.m. at the Emerging Technology Building, Room 105 on the Del Mar College West Campus.

This is a developing story, and KRIS 6 News will continue to seek answers for students about what to do moving forward. Check back on air and online for updates on this situation.​