CORPUS CHRISTI – Police say they are looking for a suspect involved in a shooting that left two women dead and sent another victim to the hospital.

The shooting happened just before 11:00 pm Friday night in the 2900 block of Mary Street. When officers arrived at the Westside Corpus Christi home, officers discovered three victims who were shot.

One victim was transported to a hospital with non-life threatening injuries. Police officers shut down parts of Mary Street so investigators could look for evidence outside of the home. Crime scene investigators were also called out to gather evidence inside the home as well.

Gena Pena, a police officer with the Corpus Christi Police Department, told KRIS 6 News last night,” We have not taken the person into custody at this moment. We are still speaking to witnesses on the scene and trying to properly identify the suspect in this aggravated assault.”

Officers say an argument led up to the shooting and investigators added the shooting does not appear to be a random incident.  Investigators say they will release more information about the incident on Monday, but couldn’t comment further because the shooting is still under investigation.

The identities of the victims from the shooting have not been released officially.

Police say they are still looking for the suspect. 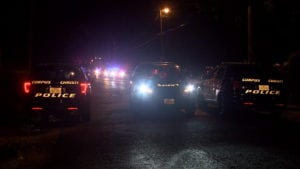 (This is a developing news story. We will update this story when more information becomes available from investigators with the Corpus Christi Police Department and the Nueces County Medical Examiner’s Office. )