Last Thursday was a big change for many students that go to Rockport-Fulton High School. During a school board meeting, students and parents were told their ROTC program would be shut down because they did not have a certified instructor.

According to Justin Tunchez, former Commanding Officer of unit 2017, says he found out they wanted to get rid of the program, so he fought his way to get a longer timeline.

“It wasn’t even a thing, like whenever we were in school,” says Executive Officer of 2018, Jared Stephens, “So, whenever we got that information, we were in total shock and we were like why are they doing this?”

His mother and current, former students and other parents showed up at Rockport-Fulton High School Monday morning to speak with KRIS 6 News about the situation.

Jared’s mother, Dawn Beckwith says, “at the end of the year, our program was thriving, and then for this to happen right now, it’s like..it makes no sense whatsoever.”

At the end of the 2017 school year, the ROTC program was thriving. Despite the destruction it faced from Hurricane Harvey. Their Annex building was completely flooded, along with other parts of the school destroyed. The students in ROTC had to travel to different schools like Gregory-Portland and Aransas Pass just to practice, then just like the 7 years before them, they made it to state. 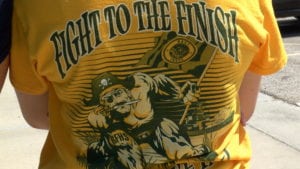 “We worked so hard after Harvey  just to build it up where it was today. And we recruited about 33 incoming freshman cadet’s just to keep the program running, because, this program does wonders for kids. Because you wouldn’t expect a high school program to have so much impact on young kids as we are,” says Tunchez.

The students of Rockport-Fulton’s ROTC are heavily involved in community service and find that this program helps any child in any facet of their lives.

If there are possible candidates that think they may meet the qualifications, contact RFHS @ 361-790-2220 to acquire information with Human Resources.