6 Investigates: What are Corpus Christi city leaders doing about homelessness 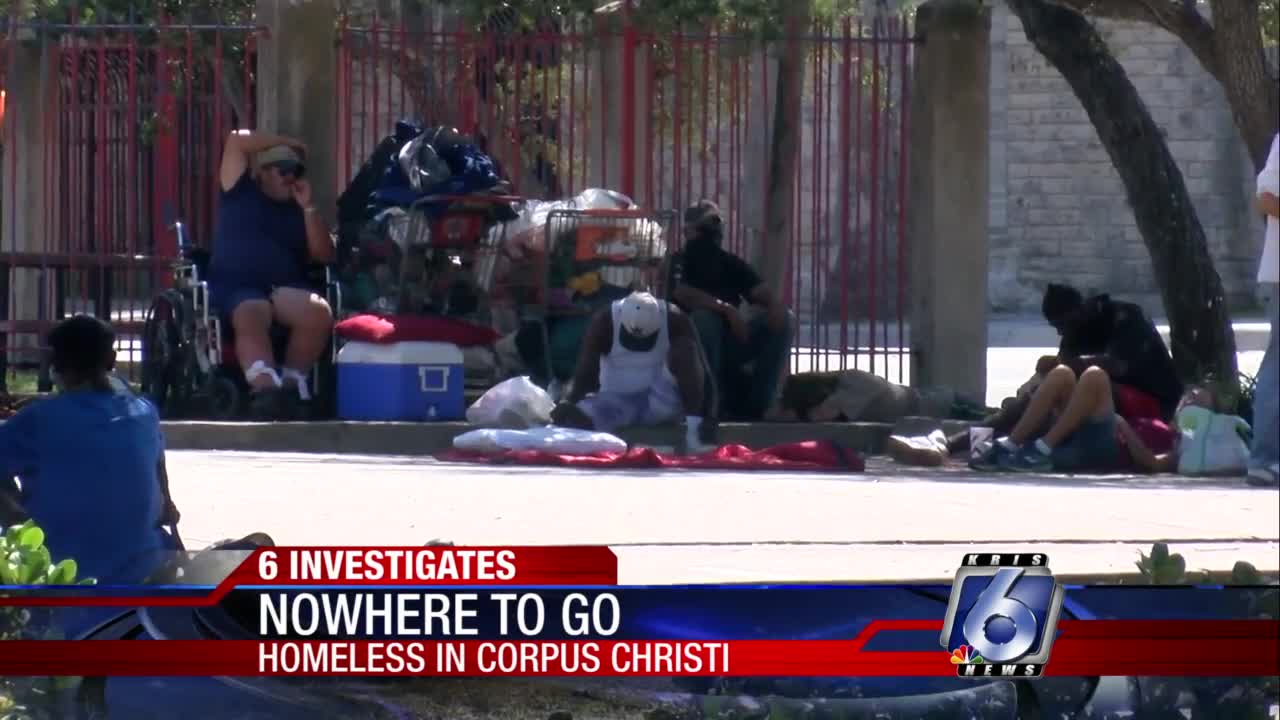 6 INVESTIGATES: Does the city have a plan for the homeless population?

CORPUS CHRISTI, Texas — Rosann Garcia has been without a home for decades, working when she can.

She is on a mission to help the people others she sees living on the street day in and day out.

"We understand it’s a tourist city, but where do we go?" she said.

Across the street from City Hall sits a vacant Catholic school. It has become a place of refuge for many people who have nowhere to go, as shelters have limited their capacities because of COVID-19.

The old Sacred Heart Catholic Church, which is owned by the Diocese of Corpus Christi, has given permission for the area's homeless population to use its parking lot.

"The people you see there across, we call that 'The Square,' " said a homeless man from Houston named Larry. "It’s a place where . . . salvation."

Larry moved to Corpus Christi after he lost his job in Houston due to the novel coronavirus pandemic. He said many people that gather at 'The Square' have nowhere else to go. Some have been homeless for a long time; some work, but don't have a place to sleep, and some just hang out, but they've all created their own community there.

The people who live in this area originally were told they would be moving October 1. Then city officials, who drive by The Square every day, told KRIS 6 News they had until Oct. 16.

Corpus Christi City Manager Peter Zanoni said the city is working on a plan, but that he is not aware of a set deadline to move the homeless population. The city council also has not been briefed on a plan.

"What the ingredients include is: We have money from the federal government," Zanoni said. "We know there’s a need, the staff in the Housing and Homelessness Unit have been looking at potential sites. We would need one of our partner agencies to run the facility."

In 2019, the City of Corpus Christi created a Homeless Coalition. It has been a year since the formation of the coalition.

When KRIS 6 News spoke to city chief of staff Michael Rodriguez, he said staffing issues within that department have been part of the delay in executing a plan. The city is currently looking for a homeless administrator.

He did say that the city, along with Corpus Christi Hope House and the Salvation Army, have entered into a $1.8 million contract to help homeless residents being affected by the novel coronavirus. That money helps with rent and utility assistance. Since Oct. 7, the city said, $290,941 has been spent.

Rodriguez said that the city has also helped pay for personal protective equipment and hand sanitizer for many of the shelter agencies, but a plan for the rest of that money has not yet been made.

The Diocese of Corpus Christi also wanted to help the people that had called its parking lot "home."

The Diocese of Corpus Christi's Social Ministry Director Jaime Reyna said they knew it was their duty to help these people, no matter what form that help took.

"The more we got to talk to our homeless brothers and sisters, the more they shared what were some of their needs," he said. "And they were things that we take for granted."

Reyna said the diocese learned their homeless neighbors just wanted basic necessities -- restrooms, and somewhere they can wash up.

He said after speaking to many of the people, he realized that the places they would usually go to use the restrooms, such as Whataburger, were closed because of the pandemic.

With donations and help from Catholic Charities, a portable toilet was put in the parking lot.

"That’s basically where we use the restroom now, anywhere we could," said Johnny, who has been homeless for more than 40 years."That’s why you’d see so much feces around City Hall."

Johnny works and said all he cares about is making sure he smells clean and has clean clothes.

Garcia said he also learned that was a priority, as well, from the conversations he has had with the residents.

"It was hygiene and restrooms -- then shelter," he said.

As of now, the city and the Diocese of Corpus Christi are trying to work together to relocate the people staying at The Square, but the question remains, where will they go?

Chief of Staff Rodriguez did not have a definite relocation plan, nor an overall plan for how the city plans to alleviate Corpus Christi's homelessness issue.

Zanoni said the city is looking for a "low-barrier shelter" that will have hygiene access and on-site security.

"It’s pretty much just a nice, shaded structure with some restroom facilities and maybe some need for storage of a person's belongings," he said.

But where that structure would be located within the city remains to be seen.

As for now, the area that these people call The Square will only be their home for the foreseeable future until the city formulates a plan to move them.