It all began about 6 a.m.  this morning (Thursday).

CCPD tells KRIS6 News that a 43 year old man broke into a home on the 700 block of Cornelia Circle.

The resident of the home, who was elderly, was able to hold the alleged intruder at gun point.

The suspect escaped and ran across the street to another house and was confronted by the homeowner. After a  struggle he ran out of the home.

A  woman was dropping off her child at a baby sitter’s house across the street.

The man allegedly carjacked her car and headed for Crosstown Expressway.

Police tell us the suspect was traveling southbound at a high rate of speed.

He clipped a red pickup truck that caused it to roll over, traveling down the embankment ending up near the Burger King on the Crosstown Access Road near Horne.

The suspect’s car, a  white vehicle, hit the median and was severely damaged. 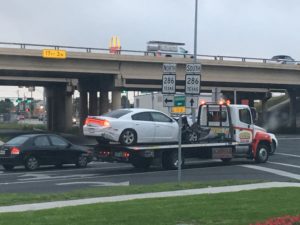 The suspect and the driver were transported to the hospital with non-life threatening injuries.

We will have more on the story and information becomes available.