Massive crowds gathered at the beach in Port Aransas not to just swim but many were there for the 2019 Texas Sandfest.

Folks were able to check out the creative works of art.

The Texas Sandfest is one of Port A’s biggest events every year.

It was a race against time for many sand sculptors as they were getting ready to show the judges their finished masterpieces.

Sandfest was filled with creative minds at work from sea turtles, detailed designed sand castles to even a ‘Jacked Rabbit.’

“Well I’m hoping we win, we got some good competition but I’m hoping either first or second,” says Daisy Palmer.

Juniors from the Austin Waldorf School share what it takes to participate in a competition like the Texas Sandfest.

“It’s hours of shoveling and mixing to make the bases and everything and then it’s just carving as fast as you can pretty much,” says Charlotte Brenner.

Some even share how their pieces of art speak personally to them.

Joris Kivits traveled all the way from the Netherlands to participate in this competition. 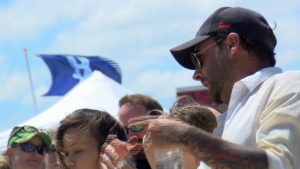 His sculpture was dedicated to someone close to his heart.

This is the second time Kivits took part in the Texas Sandfest and his very first year, he won.

Kivits says, he is not all that good at speaking.

However, with this competition, he is able to speak through his sculptures.

“These kind of events are for me to express whatever I want,” says Kivits.