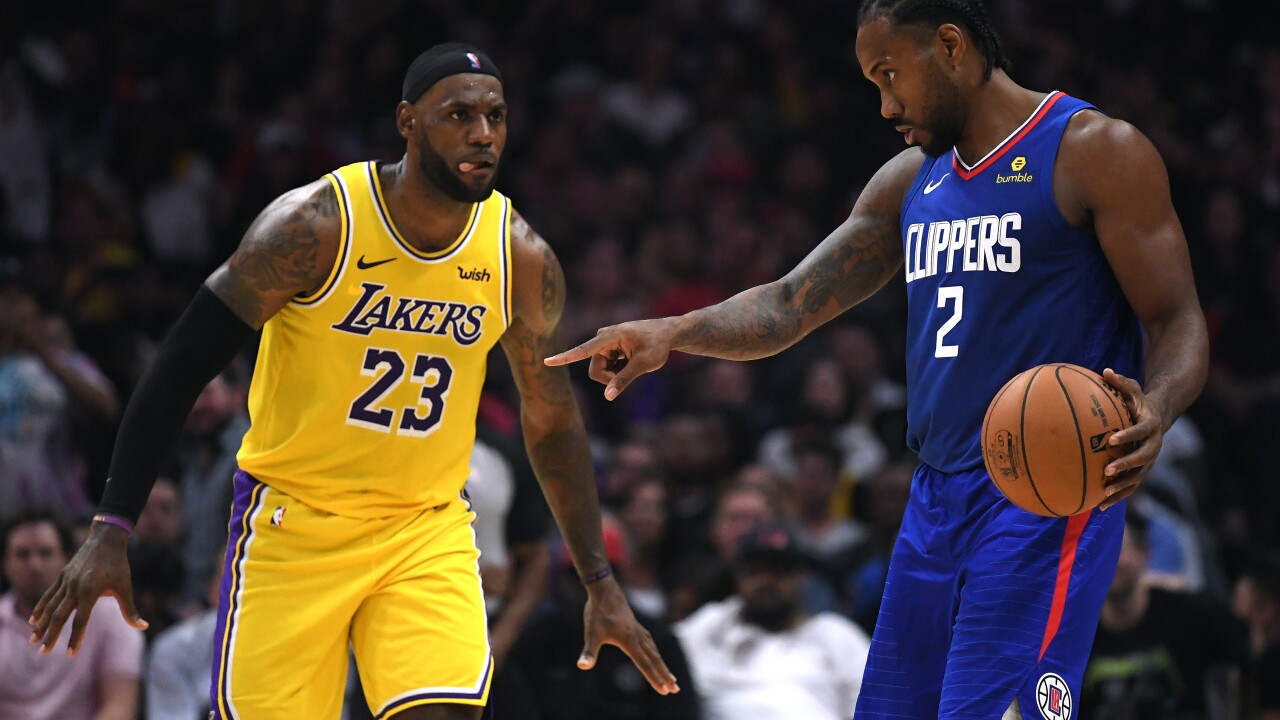 Harry How/Getty Images
LOS ANGELES, CALIFORNIA - OCTOBER 22: Kawhi Leonard #2 of the LA Clippers controls possession of the ball in front of LeBron James #23 of the Los Angeles Lakers late in the fourth quarter in a 112-102 Clipper win during the LA Clippers season home opener at Staples Center on October 22, 2019 in Los Angeles, California. (Photo by Harry How/Getty Images)

LOS ANGELES (AP) — The NBA fined the Los Angeles Clippers $50,000 on Thursday for statements made by coach Doc Rivers and others that were "inconsistent" about Kawhi Leonard's health.

"I'm disappointed. He's my coach and I'm on his side," Leonard said of the fine. "I'm not a doctor, but we're going to do what's best for me to be healthy so I can play basketball games. I can't read too much into it."

The NBA initially confirmed the Clippers were compliant with league rules in resting Leonard because of a knee injury. It was what Rivers said before the game that in part triggered the fine.

"He feels great," Rivers said Wednesday. "But he feels great because of what we've been doing, and we're just going to continue to do it. There's no concern here."

Rivers cited "a lot of minutes" that Leonard racked up last season while leading Toronto to its first NBA championship.

"I think Kawhi made a statement that he's never felt better," Rivers said. "It's our job to make sure he stays that way."

Less than 24 hours later, the NBA fined the Clippers for statements, including those by Rivers, that were inconsistent with Leonard's health status while also detailing his knee injury. At the same time, the league reaffirmed the team was in line with NBA rules in sitting Leonard.

"The team has reasonably determined that Leonard is suffering from an ongoing injury to the patella tendon in his left knee and has been placed by the team at this time on an injury protocol for back-to-back games," the league's statement said.

Leonard played 60 games during the 2018-19 regular season and another 24 in the playoffs for Toronto. He averaged 30.5 points and 9.1 rebounds in the postseason and was MVP of the NBA Finals.

Before training camp with the Clippers, the 28-year-old forward said he was feeling "way better" than he did at the start of last season and that no load management plan was in place yet.

Rivers indicated he was disappointed by the fine.

"I think we said it all," he explained Thursday. "I'm not getting into it. What we said, we said."