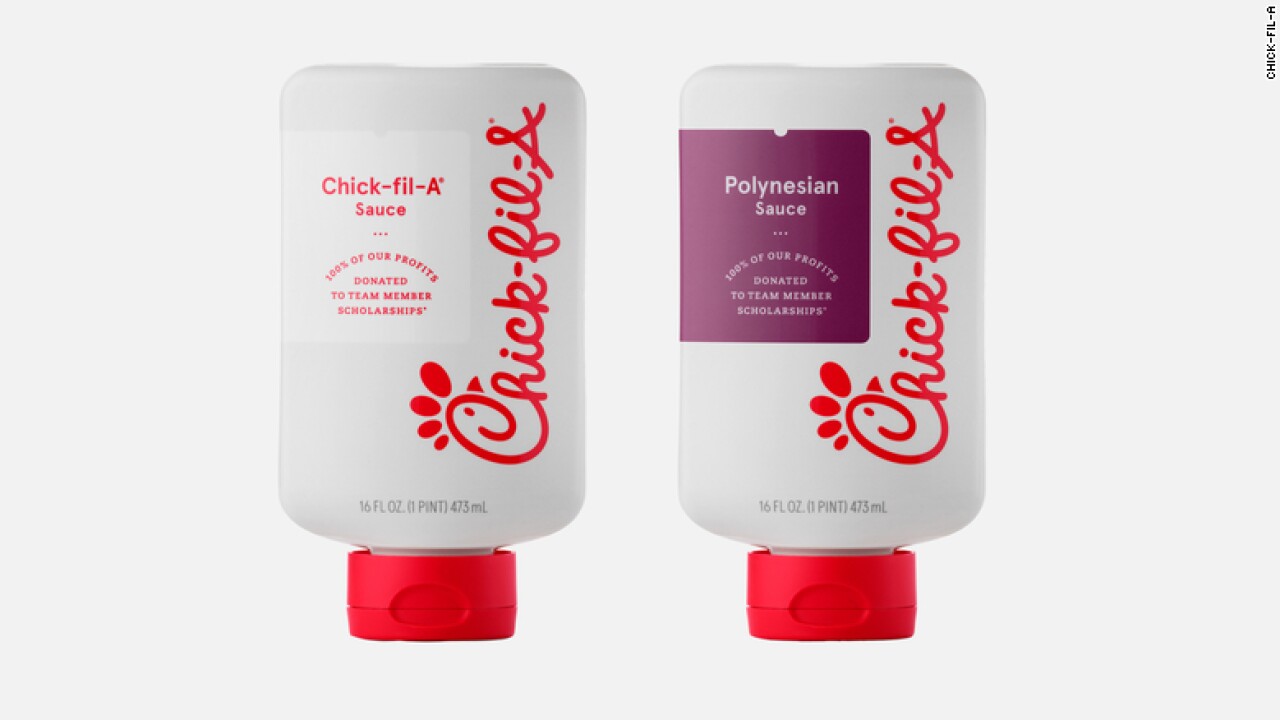 NEW YORK -- Chick-fil-A is entering the grocery business with bottles of its signature and Polynesian sauces.

Starting in April, the 16-ounce bottles will be sold in Florida at Publix, Target (TGT), Walmart and Winn-Dixie stores for around $3.49. It's the first time that Chick-fil-A will sell its products in retail stores.

The move is part of Chick-fil-A's broader strategy to reach people outside of the restaurant.

"Increasingly, our customers are searching for ways to enjoy our brand at home," Michael Patrick, principal program lead for Chick-fil-A's Beyond the Restaurant team, told CNN Business in an email.

Recently, fast food chains have struggled with sluggish traffic in stores, so they're looking for new ways to reach people at home and at work, often by partnering with delivery services and encouraging customers to use their apps.

Chick-fil-A has experimented with meal kits that customers could pick up in stores and locations with no dining rooms, designed to exclusively fill delivery and catering orders.

The company has been exploring ways to break into retail for a while, said Patrick.

"We're seeing a blurring of lines between all food channels," he noted.

Other restaurant chains — like The Cheesecake Factory, TGI Fridays, IHOP and others — sell versions of their sauces, syrups and products in retail.

"We are looking to learn more about the retail channel," Patrick added.

Wawa goes after the dinner crowd with burgers and chicken sandwiches.

There's reason to believe that customers will buy full bottles of the sauce.

Food blogs have recipes for copycat versions of the sauce, and Walmart (WMT) sells a "restaurant style" chicken dipping sauce which some have called a knockoff version of the product.

"Our customers love our sauces," said Patrick. "Chick-fil-A Sauce and Polynesian Sauce are our two most popular sauces, which is why these flavors are leading the way."

For now, the pilot program is limited to Florida, but Chick-fil-A may one day roll the bottled sauces out nationally.

In addition to selling the bottles in big box stores in Florida, some Florida locations of Chick-fil-A will also offer 8-ounce bottles of its signature, Polynesian, Barbeque, Honey Mustard and Garden Herb Ranch sauces with catering orders and for purchase staring this month.

All proceeds from the bottle sales will go to Chick-fil-A's scholarship fund for employees, even if the pilot expands beyond Florida.