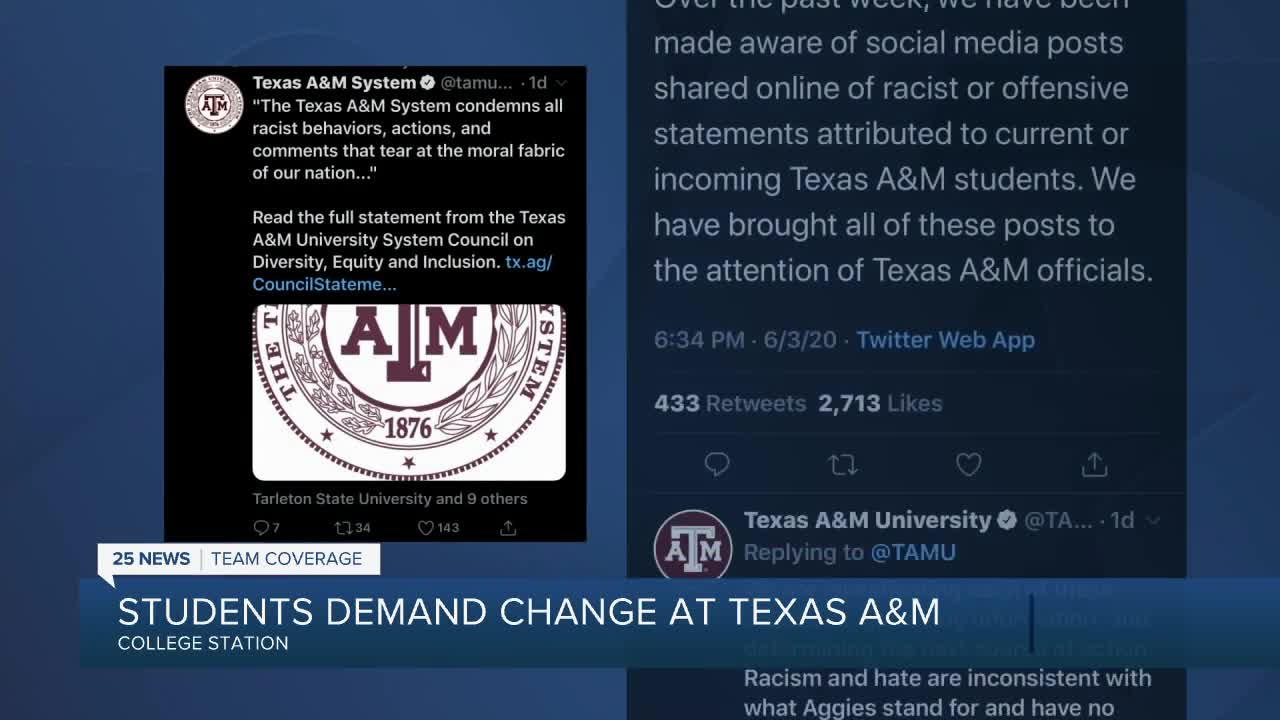 As we continue to see protest around the nation and here in our own communities, students are also using their voices to demand change and shed light on racial issues within their own schools.

We have seen the protests on the ground but there are also social media protests happening on Twitter. Students at Texas A&M are using the power of social media to shed light on the racism within their student body, asking for the university to finally take action.

One look at Aggie tweets and you will see they are outraged. The anger stems from racist and offensive photos and comments made by fellow Aggies. Now, a petition is circulating for current and future Aggies to face repercussions.

"I want some kind of authority being taken of these kids being punished," said petition creator an Amorae' Shamberger, TAMU Class of 2023.

These tweets come at a time when the country is protesting for social justice and equality. Minority students, like Rushali Sarkar, are sharing their experiences, hoping the university takes action and shows zero tolerance for racism.

"I’ve seen, unfortunately, a lot of stories like mine that are on Aggie Twitter that do get attention, but I never see any kind of resolution that comes from the school,” she said.

Since sharing her experience with Aggie Twitter, Rushali has received an apology from the university, which she says is the first step.

"I really do hope they [Texas A&M University] take our concerns seriously and acting upon them and addressing the students directly who have been involved in this," she said.

Though apologizing is a start, students want action.

“A&M needs to take the next step towards addressing this, and like the other universities have been doing, holding those students accountable,” said Sarkar.

Actions like those taken by the University of South Carolina. It has already dealt with students who have posted racist comments.

“USC did it too. They took advice from the students," said Shamberger.

What these Aggies don't want is to be ignored.

"Don't brush us off like it's just, "Oh okay, they’ll get over it," cause we’re not. We’re outraged,” said Shamberger.

Their outrage is taking them to the university president's office to demand change.

25 News did reach out to the Office of the President for an interview, but they were unable to provide a comment at this time. The university has released a statement on Twitter saying they have been made aware of the racist and offensive statements by current and incoming students and are conducting an investigation .