Monday Medical Report: Psoriasis affects as many as 7.5 million Americans

It is time for our Monday medical report.

Psoriasis is the most common autoimmune disease in the United States, affecting as many as 7.5 million Americans. It is often misdiagnosed as a rash, ringworm or other skin irritation, such as eczema, according to the National Psoriasis Foundation.

About 30 percent of those who develop the skin disease also go on to develop psoriatic arthritis, an inflammatory form of arthritis that can be disabling.

Psoriasis is not generally thought of as life-threatening, but it just might be for those with the severest forms of the disease.

In a new study, people with severe psoriasis had a 50% increased risk of death compared with people without the inflammatory skin disease.

“A significant number of people with psoriasis have an increase in heart disease, strokes, and things like that. So it is pretty important if you have severe psoriasis that covers more than 10 percent of your body to check with your family doctor and make sure they are monitoring you for any heart disease type things,” said Dermatologist Dr. Beverly Held.

Psoriasis is a common skin condition that speeds up the life cycle of skin cells. It causes cells to build up rapidly on the surface of the skin.

“There is no cure for psoriasis as of today. But we have multiple treatments, depending on the severity of the psoriasis and how much of the body area is being covered. We can either use surface treatments: creams, lotions, potions, and things we rub on it. We can go all the way to new biologic treatments which are injectables,” said Dr, Held.

Psoriasis is a chronic disease that often comes and goes. The main goal of treatment is to stop the skin cells from growing so quickly.

“The skin disease can be managed with these newer treatments that we have, however, they are expensive and not all insurance will cover them. But most of the time, we can get the skin pretty clear,” said Dr. Held.

There is no cure for psoriasis, but you can manage symptoms. Lifestyle measures, such as moisturizing, quitting smoking and managing stress, may help.

“Most of the people who have psoriasis don’t have too many symptoms. They can be very itchy in some cases. So they may have a lot of itching, and a lot of patients find that it is really aggravating when they get under more stress,” said Dr. Held.

When to see a doctor
If you suspect that you may have psoriasis, see your doctor for an examination. Also, talk to your doctor if your psoriasis:

Seek medical advice if your signs and symptoms worsen or don’t improve with treatment. You may need a different medication or a combination of treatments to manage the psoriasis.

Causes
The cause of psoriasis isn’t fully understood, but it’s thought to be related to an immune system problem with T cells and other white blood cells, called neutrophils, in your body.
T cells normally travel through the body to defend against foreign substances, such as viruses or bacteria.

But if you have psoriasis, the T cells attack healthy skin cells by mistake, as if to heal a wound or to fight an infection.

The process becomes an ongoing cycle in which new skin cells move to the outermost layer of skin too quickly – in days rather than weeks.
Skin cells build up in thick, scaly patches on the skin’s surface, continuing until treatment stops the cycle.

Psoriasis triggers
Psoriasis typically starts or worsens because of a trigger that you may be able to identify and avoid. Factors that may trigger psoriasis include:

Risk factors
Anyone can develop psoriasis, but these factors can increase your risk of developing the disease:

Complications
If you have psoriasis, you’re at greater risk of developing certain diseases. These include:
Psoriatic arthritis. This complication of psoriasis can cause joint damage and a loss of function in some joints, which can be debilitating.

Eye conditions. Certain eye disorders – such as conjunctivitis, blepharitis and uveitis – are more common in people with psoriasis.

Parkinson’s disease. This chronic neurological condition is more likely to occur in people with psoriasis.

Emotional problems. Psoriasis can also affect your quality of life. Psoriasis is associated with low self-esteem and depression. You may also withdraw socially. 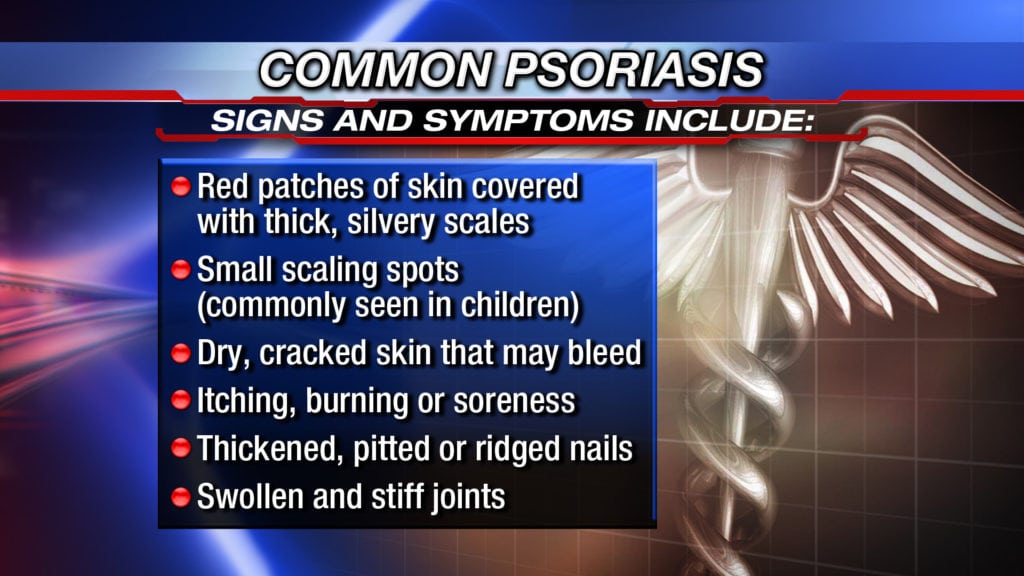