There are plenty of weekend activities going on this weekend from the Corpus Christi Rodeo, Aransas Pass Sand Fest and the Rockport Kite Festival just to name a few.  With upper-level high pressure in control of the weather pattern, we’ll enjoy lots of sunshine with only a few high level based whispy clouds and chances of any rainfall out of the forecast.

Tonight, it will be mainly clear and still cool with lows falling into the middle to low 60s.  There may be a few spots of some fog in low-lying areas.  Wind: SSE 5-10 MPH

Saturday and Sunday will feature lots of sun and increasing winds from the southeast around 15-20MPH.  This means humidity will be on the increase, so be sure to stay hydrated by drinking lots of water if you plan on being outdoors in the sun as highs will push the mid to upper 80s.

Monday and going into much of next week, the upper-level high pressure will move farther east and a disturbance will move into the southwestern United States.  This will bring in more clouds, increase winds further here and keep high temperatures in the middle to upper 80s.

Given that low-level moisture off the Gulf will still be in play, we could see some passing spotty showers on Wednesday and Thursday with the cloud cover.  At this time a weak front looks to push all the way into South Texas on Friday and that may kick off another round of moderate showers and thundershowers.  That looks like our next best opportunity to see some rainfall.

Have a great weekend! 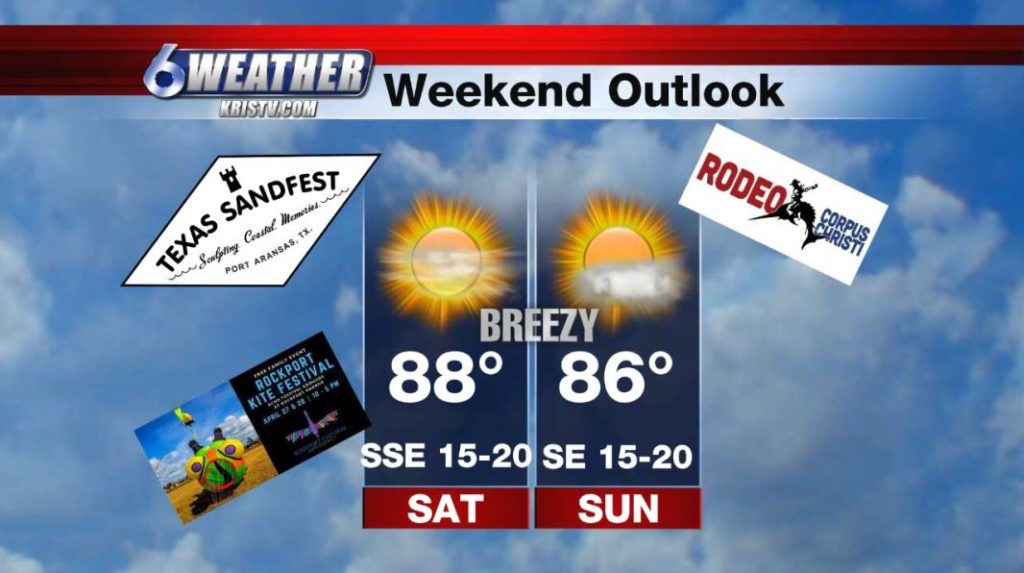