Unlikely to be implemented for start of season 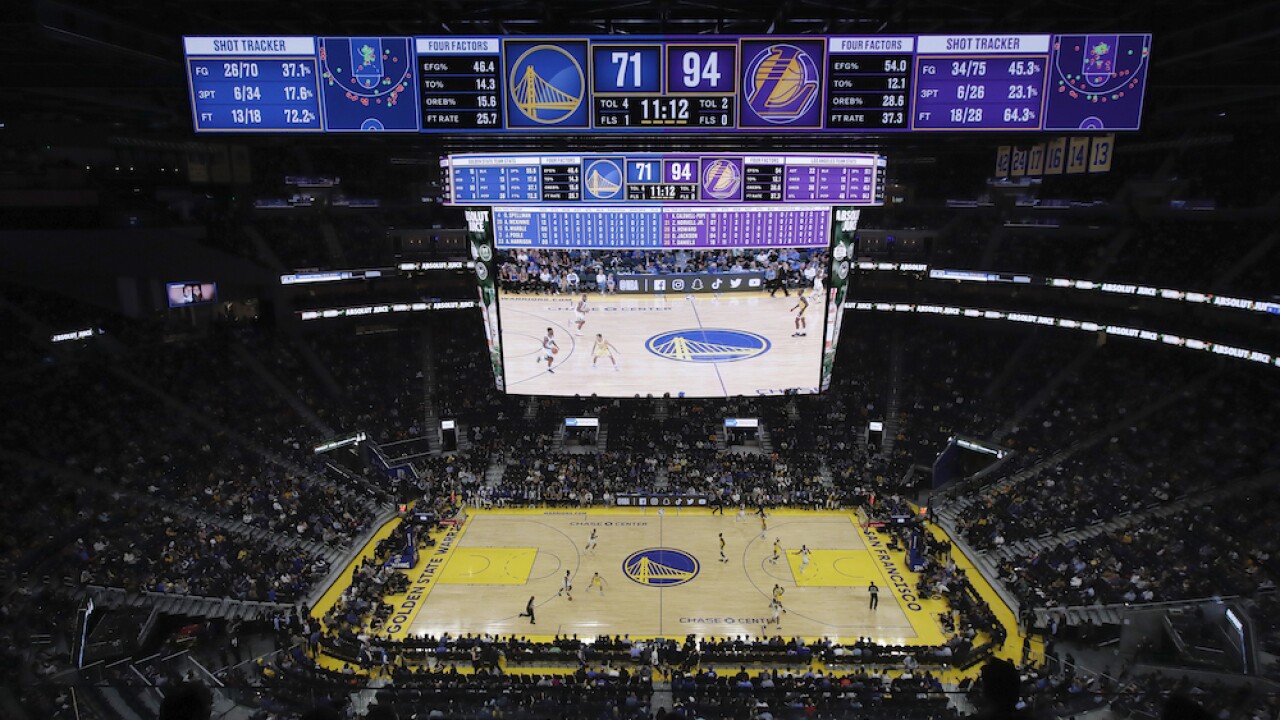 Copyright 2019 The Associated Press. All rights reserved
Jeff Chiu/AP
Fans watch from a general view of Chase Center during the second half of a preseason NBA basketball game between the Golden State Warriors and the Los Angeles Lakers in San Francisco, Saturday, Oct. 5, 2019. (AP Photo/Jeff Chiu)

With a new NBA slated to tip-off in December, the Golden State Warriors have approached the city of San Francisco with an ambitious plan in the hopes of hosting fans at their home games.

According to ESPN and the San Francisco Chronicle, the plan involves requiring every fan who hopes to attend a Warriors game to test negative for the virus before entering the arena.

Team owner Joe Lacob says he hopes to conduct thousands of rapid PCR tests — tests that can detect the genetic material of COVID-19 from a nose of throat swab within 15 minutes. The team would set up testing sites in front of the arena and test fans in the hours before the game. The Warriors would also mail test kits to some fans, who could take the test and home and provide a sample before entering the arena.

PCR tests are considered extremely reliable and accurate, and the NBA employed them when the league held games in its Florida "bubble" over the summer.

However, the tests are expensive — Laocb estimates the testing regiment could cost up to $30 million a game. But he told ESPN that finding a way to get fans back in the stands is vital for the league's long-term survival, should the virus continue to impact seasons beyond 2021-2022.

"I not only want to get this done and show the world how we can do it now, I'm willing to spend the money to do it," Lacob told ESPN. "This is a serious, serious problem. It cannot go on for multiple years ... because if this were to go on for several years, the NBA is no more. You cannot sustain this league with no fans. You can do it for a year. We'll all get by for a year. But suppose we're in this situation next year. Now we're talking some serious, serious financial damage to a lot of people."

Even with the rapid tests, the Warriors would still limit crowd size to about 9,000, or about half of Chase Center's capacity. Spectators would also be required to wear a mask and would be asked to keep social distance.

However, the San Francisco Chronicle reports that it is unlikely the city will approve a plan to have fans return to Chase Center in time for the start of the season on Dec. 22. The city recently stepped back its plan to reopen some businesses due to a spike in cases and shut down indoor restaurant dining on Friday.

"I would have to see the plans before committing to be supportive of any arena reopening timeline," city supervisor Matt Haney told the Chronicle. "I think at a time when we are seeing a spike in cases and rolling back indoor dining, reopening large arenas in the near term feels obviously premature."

Since the start of the pandemic, no California pro sports teams have hosted fans in their stadiums. No MLB teams hosted fans during the regular season or in the early rounds of the playoffs, and in the NFL, the Rams, Chargers and 49ers have yet to host fans at any of their home games.