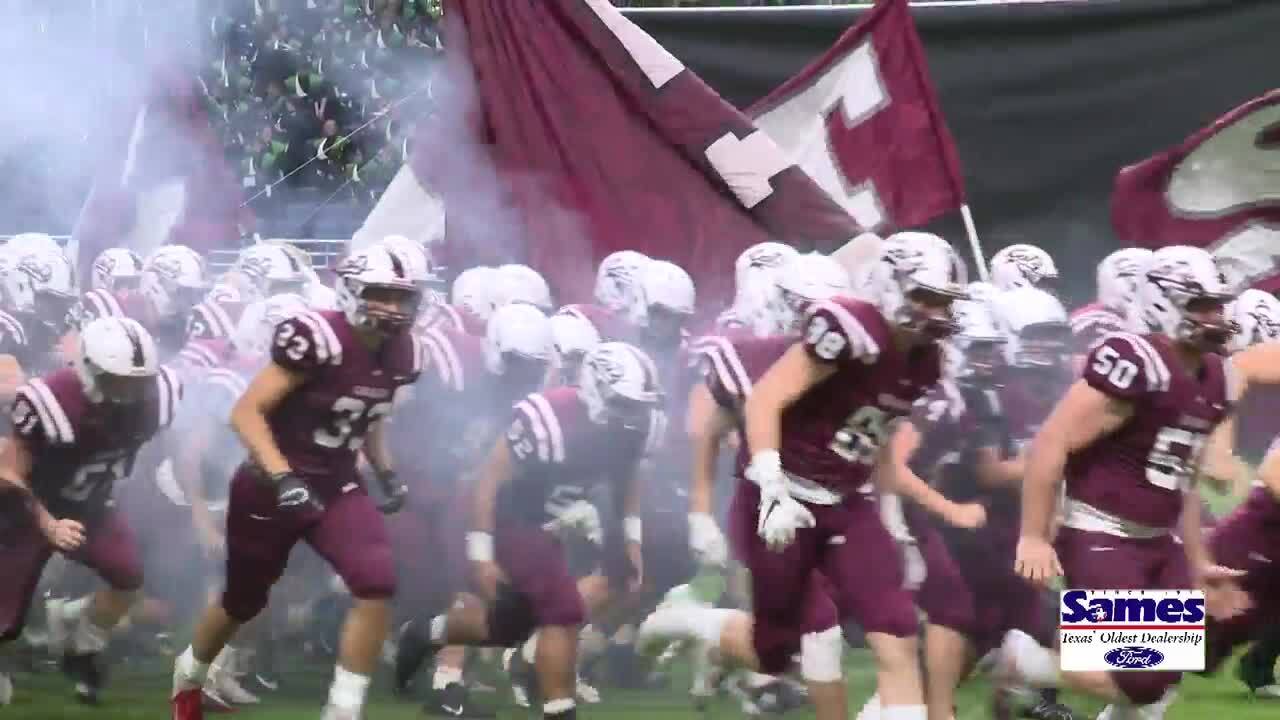 KRIS file photo.
The Calallen Wildcats will be facing a big challenge Saturday at the Alamodome in San Antonio when they meet Boerne Champion in the Class 5A-Division II Region finals. Kickoff will be at 8 p.m.

The Chargers (13-1) stormed back from an early 14-point deficit, turning the game around with a run of 20 straight points midway through the second half.

It ends the season for Calallen (12-2) in the state quarterfinals of Class 5A Division II playoffs.

Boyers, a TCU baseball recruit, was at his best playing from behind. He passed for 326 yards and three touchdowns and also added 53 more rushing yards and another score.

Saturday's victory marked the first time this decade that Champion beat the Wildcats in the playoffs. Three times previously, Calallen had eliminated Champion from the playoffs.

Tamari Jenkins' 20-yard TD on a counter play gave Champion its first lead at 35-28 on the first play of the fourth quarter. The Chargers then extended the lead to 41-28 on a fumble recovery in the end zone for another score by Walker Scott.

Calallen charged back on a 69-yard touchdown on a "hide-and-seek" gadget play by Jeremiah Earls to pull within 41-35.

And then, the Wildcats appeared to have grabbed momentum when Champion muffed an attempted fair catch on the ensuing kickoff at the Charger 4.

But on third-and-10, Pike got behind the Calallen defense for a 96-yard scoring strike to ice the victory. The two-point conversion gave Champion a 49-35 lead.

Pike had only one touchdown reception this season before Saturday night. But he scored on both of his catches on Saturday, producing a career-best 186 receiving yards.

An 8-yard pass from Calallen quarterback Jarrett Garza to Stephen Paul pulled the 'Cats within 49-42 with 58 seconds left. But the Wildcats failed to recover the onside kick as Champion killed the clock.

Champion will face Fort Marshall next week in the state semifinals. The Buffaloes advanced with a 40-10 triumph over Manvel earlier on Saturday afternoon. Marshall eliminated Calallen from the playoffs last season.

The Wildcats had a slow start offensively. They didn't produce their first first down until early in the second quarter. But they then took the lead on Earls' 27-yard touchdown run 62 seconds into the second quarter. It was his first of three touchdowns in a monster game that featured 180 rushing yards.

But Champion stormed back on the ensuing possession. Boyers' 89-yard TD pass three play later to Pike pulled them within 14-7.

Champion took advantage of a Calallen special teams mistake to pull into a 14-14 halftime tie. After partially blocking Riggs Barrett's punt, Boyers' 24-yard strike to Ryan Brandon with 1:41 left in the first half.

But on the ensuing kickoff, a critical mistake in the kicking game bit the Wildcats. Brandon initially muffed his return before he turned it into an 85-yard touchdown return only 14 seconds later.

Calallen reclaimed the lead on a 47-yard TD run by Earls on third-and-22.

The Wildcats' special teams bedeviled them again on a huge kickoff return by Pike to the Calallen 35. That led to a game-tying 34-yard touchdown run by Boyers and a 28-all score with 3:04 left in the third quarter.