The Fever is back for the Class 2A Division I Quarterfinal, with the Refugio Bobcats taking on the Mason Punchers.

The No. 1 Punchers (14-0) scored on three straight possessions midway through the first half and cruised to a 28-14 victory Friday at the Alamodome in San Antonio.

It ends a memorable season for Refugio (11-3) which moved back to its traditional Veer offense midway through the season after an uncharacteristic slump earlier this season after switching offenses.

Friday’s victory snapped a three-game losing streak for Mason to Refugio in the last three seasons.

The Bobcats’ chances got a boost late in the half when Mason starting quarter Otto Wofford, doubling as a safety, was kicked out of the game for targeting while he played defense. It means that backup junior quarterback Whitt Bierschwale will have to bring them home in the second half if the No. 1 Punchers are to advance in the playoffs.

Earlier, Mason claimed a 14-7 lead over the Bobcats after scoring on the final play of the quarter. 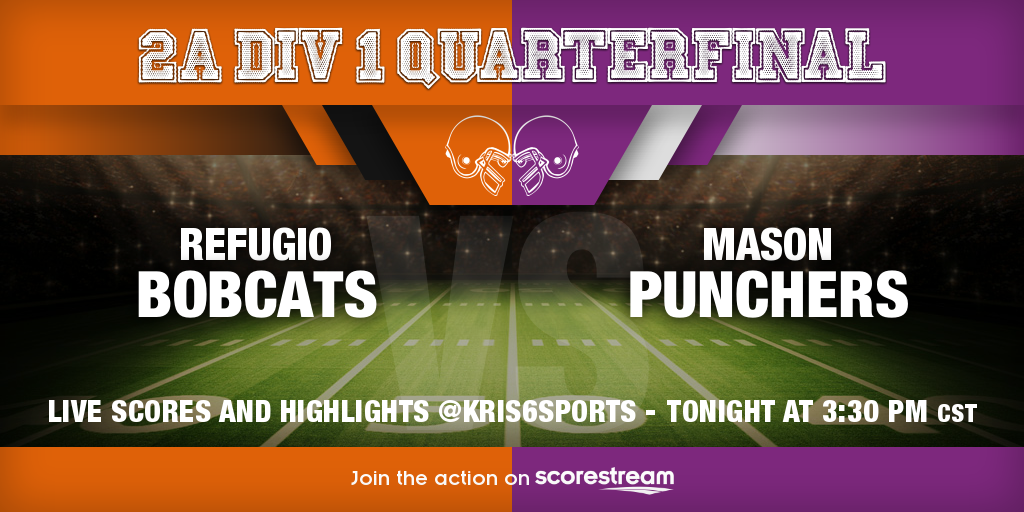 Stick with the Friday Night Fever crew to follow all of the action, which starts at 3:30 p.m. Friday.

KRIS 6 Sports Director Alan Harwell is on the field at the Alamodome for today’s game, sending out updates and highlights,and up-to-the-minute scores will be posted below.

But if you’d like a way to be at absolutely every game at once (no super powers needed), join us on Scorestream by downloading the app at this link. It’s free and gives you exclusive access to the field (we’ll be there too).

There is no local radio or television in the Coastal Bend of the Friday afternoon game. We’ve arranged to try and keep up to date with all of the information from the Alamodome as quickly as we learn about it.