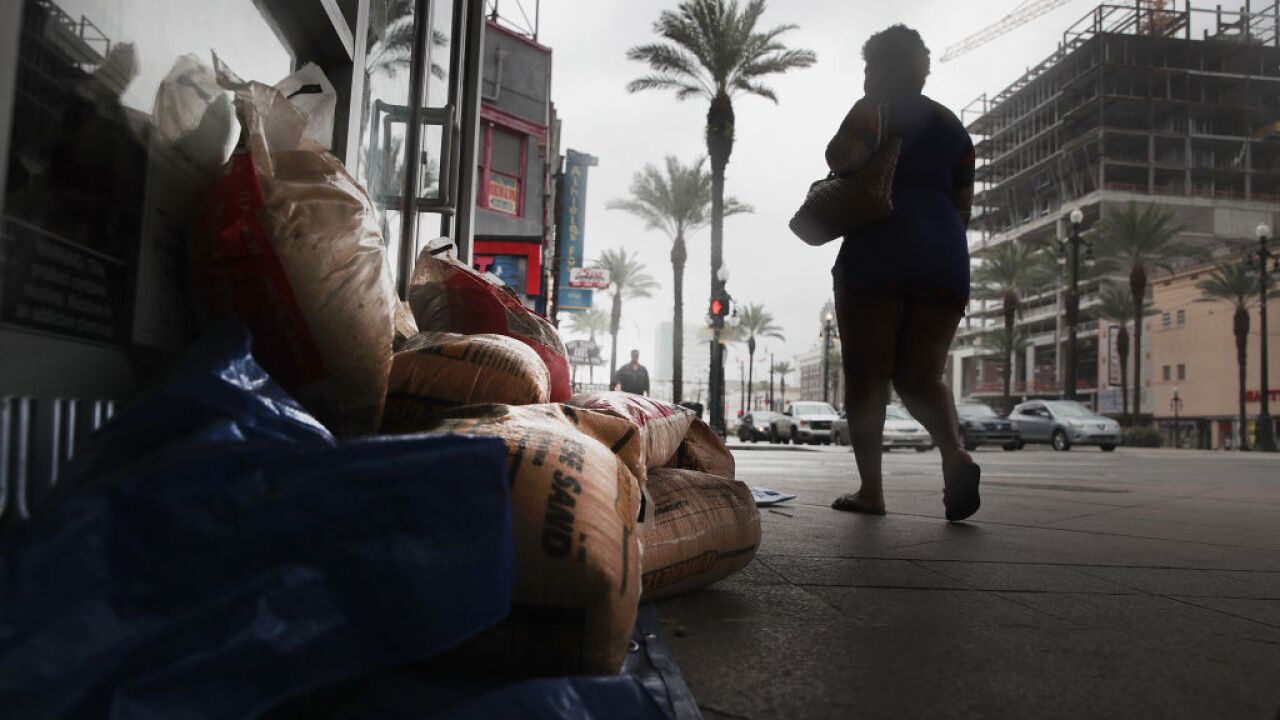 Residents along the Louisiana Coast are being encouraged to stay in shelter as Tropical Storm is making its final approach to the coast late Friday. As of 8 a.m. ET, Barry remains a strong tropical storm with top winds of 70 MPH.

Its rainbands are moving onshore in Louisiana as it inches northwest at 5 mph, bringing a dangerous storm surge and possible tornadoes. Its slow trek means a longer period of heavy rainfall and flooding in the region that will last through next week, the center said .

A hurricane warning is in effect along a part of the Louisiana coast while areas farther inland like the lower Mississippi Valley are under tropical storm warnings. Tropical-storm-force winds will extend up to 175 miles outward from the storm's center.

And as of Saturday morning, more than 48,000 across in Louisiana were without power, according to state electric providers.

With Hurricane Katrina on their minds, many New Orleans residents fled the region while others have chosen to buckle up and ride the storm.

Tanya Gulliver-Garcia, who lives in the city's Broadmoor neighborhood, flew out ahead of the hurricane. The neighbors she left behind all have vivid memories of the 2005 destruction, she said.

"This storm is stressing them out," Gulliver-Garcia told CNN. "Trauma stays in your body, and Katrina left a lot of trauma behind."

But many -- despite the haunting 2005 memories -- are determined to ride it out. Herman Grady evacuated during Katrina, but this time, he's staying back.

Barry's potential hurricane status isn't the only concern. It's the heavy rains and flooding that'll be left behind after the storm passes.

"We are talking about 18-24 hours after landfall, the rain will still be coming down and will be the issue," CNN Meteorologist Michael Guy said.

Gov. John Bel Edwards said some areas could see up to 25 inches of water.

"Nobody should take this storm lightly just because it's supposed to be a Category 1 (hurricane) when it makes landfall," the governor said. "The real danger in this storm was never about the wind anyway, it's always been about the rain and that remains a very significant threat."

When the ground is as saturated as it already is in the region, the governor said, the risks are endless. "It doesn't take much wind to cause a tree to fall or a utility pole to fall," he said. "These hazards are going to present themselves all over the state."

In Morgan City, Louisiana -- where the hurricane is expected to make landfall -- officials and city workers are worried about the lingering water.

With up to 30 inches of rain projected for the region this weekend, Mayor Frank "Boo" Grizzaffi worries it may be more than the city's drainage system can handle.

"We can handle the first 5 inches, but after that, we can pump 1 inch per hour. If we get rain greater than that, it will exceed our capacity to pump it out," he told CNN.

Mississippi River is going down

Earlier this week, officials warily eyed the Mississippi River as it continued to rise and exceeded its usual midsummer levels.

Levees protect up to 20 feet and since the storm surge has passed, the risk of overtopping is minimal, the New Orleans Office of Homeland Security and Emergency Preparedness said.

The next crest will occur Monday, according to the weather service, following more rainfall expected in the next two days.

Despite the state's post-Katrina storm defenses, the governor urged residents and community leaders to be prepared.

Across the coast, many cities and parishes have issued mandatory evacuation orders, the governor said. For the first time since their construction, all major floodgates on the Mississippi River are closed, he added.

The state's forces have mobilized and anticipate multiple search and rescue missions once Barry hits, the governor said.

Canceled flights, cruises and a concert

Some singers postponed their concerts for this weekend to Monday.

"Hang on to your tickets," the Rolling Stones told fans after moving a concert scheduled for Sunday to Monday.

"We're here with you -- we'll get through this together," the legendary band said on Twitter.

Mick Jagger also tweeted that he'll perform in the city Monday. And three Carnival Cruise Line ship departures scheduled for Saturday, Sunday and Monday are in limbo following the closure of the Port of Mobile in Alabama and New Orleans. The line said it will update passengers again Saturday morning.

And nearly 200 flights have been canceled in and out of the Louis Armstrong New Orleans International Airport, according to flight tracking website Flightaware.com