The first weekend of August has fun everywhere 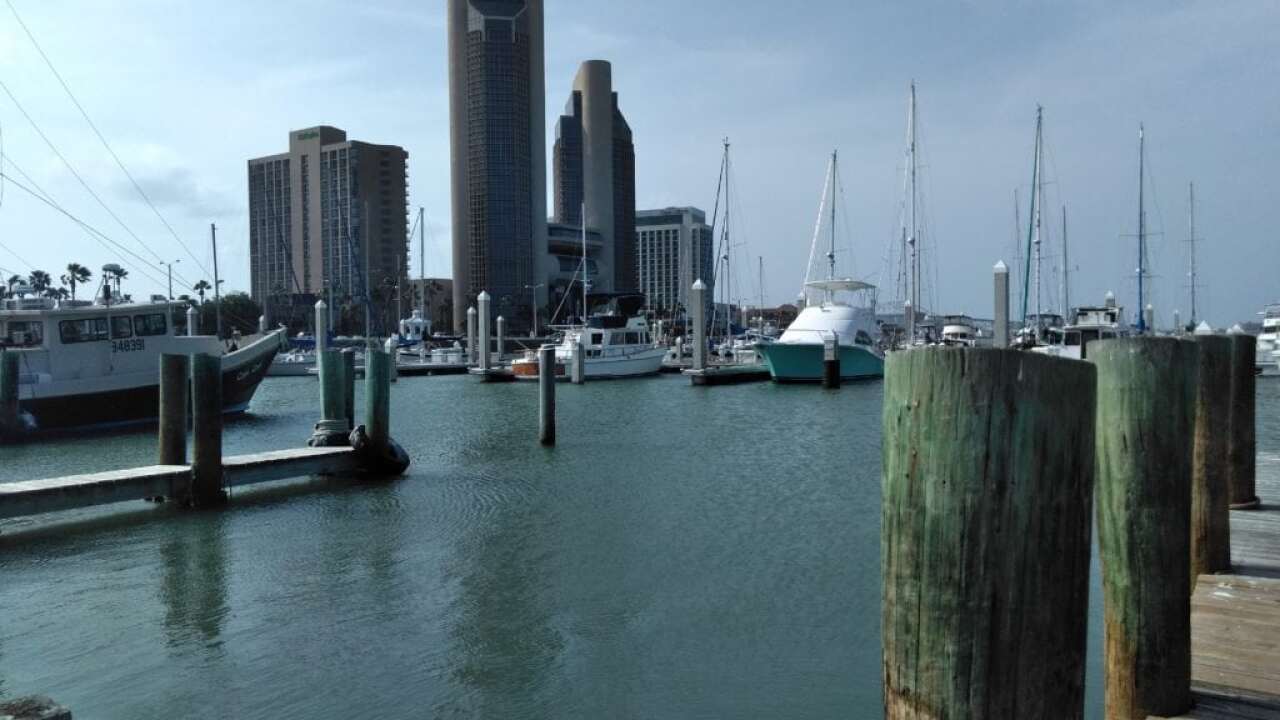 The 4th Annual Ski Bash is on this Saturday

A unique concert is happening on the island this Saturday.

All sorts of bands are coming together to play on a boat at the ski canals on Padre Island.

Check out the lineup:

Here is map of where you can join the fun!

Roger Creager's "Coastal Bender" is reeling in a weekend of fun for kids at the Ronald McDonald House Charities of Corpus Christi.

Children and families from the non-profit were invited to participate in a fishing tournament hosted by the Hook-Spit Junior Anglers on Friday.

"We've been telling them for the past few days that they're going to come out here and catch some fish," said Veronica Ramos, Community Engagement Manager at the Ronald McDonald House. "Some of them have never fished before, some of them haven't been down to the bay yet. So, they were super excited to come down here."

The Ronald McDonald House is a non-profit that provides housing, support, and other resources for families who travel far from home to seek medical care for their children. The Corpus Christi location currently is at capacity with all 25 rooms filled with families. About half of the House was able to participate in the fishing tournament.

"It felt good again being able to catch a big one," said 12-year-old Stephen Cardenas, who reeled in a large catfish in the makeshift pond. "I haven't caught a big one like that in a while."

Local artist Lanar Brandon joined in the fun by offering an art project for participants. The kids used paint to stamp small canvases with their hand prints to make them look like fish. It is a souvenir they get to keep.

The group also made a larger canvas with Brandon to auction off during the weekend-long "Coastal Bender" to raise money for the Ronald McDonald House Charities.

"It's a great fundraiser. We are trying to get these kids well, give them some hope, and some smiles," said Brandon.

On Tuesday, Roger Creager -- who is originally from the Corpus Christi area -– said the kids' fishing tournament touches his heart.

"We've been talking about this for years," Creager said about the inaugural event. "We've been trying to find a venue and a city and a place to host something like this. This year it all came together."

The "Coastal Bender" will continue into the weekend with an outdoor expo, fishing tournaments, and will be topped off with a concert featuring Creager, Chris Colston, Jack Ingram, and David Lee Murphy on Saturday evening.

For more information on the event, visit CoastalBender.com.

The Wizard of Oz is one of the most legendary films in film history, and the folks over at Alamo Drafthouse are going to celebrate that this weekend.

"Few films have stood the test of time like THE WIZARD OF OZ," their event page says, "It’s funny. It’s scary. It’s awe-inspiring. And it features some of the most beloved songs in movie (and music) history. So when we realized the film is about to celebrate its 80th anniversary, we knew we couldn’t let that milestone pass us by without throwing a Movie Party."

Oz-heads who attend the event can expect ribbon wands, lollipops (guild-approved), bubbles, and an "if I only had a brain trivia" before the movie. Feel free to dress up as your favorite character.

The party starts Saturday, August 3, around 7:30 pm at the Alamo Drafthouse in Corpus Christi, Texas.

Our local YWCA is hosting a fun night run that has had glowing reviews in the past.

Whether it rains or shines, check in starts at 7:30 pm and the race begins promptly at 8 pm.

Adults can participate for $30 and kids under 17 are only $5. The first 150 registrants will also get a free t-shirt!

"Runners, walkers, strollers are all welcome! Whether you're a serious runner, part-time joggers, or casual walker," their event page says.

Proceeds will help YWCA Programs in their mission of eliminating racism and empowering women.

Local barbecue connoisseurs will have the chance to battle it out for charity next weekend at the Battlin’ BBQ cook-off in Ingleside.

The free family-friendly Battlin’BBQ cook-off that started with a group of friends trying to raise money to help others will kick off Saturday , Aug. 3 at Simmons Park in Ingleside from 11a.m. to 8 p.m.

“In May 2018, a high school friend asked us to sell barbecue plates to help with the costs of medical bills and immediate needs due to his 5-year-old son being diagnosed with brain cancer. So, a group of old high school friends from Ingleside got together and turned it into a cook off to help make a larger impact," Battlin' BBQ vice president Amanda Carmichael said. "As word spread, we gained a huge support from the community, and it blossomed into the wonder event that you see today.”

So far, 28 teams have signed up and at least 40 teams are expected to compete in categories of chicken, brisket and pork ribs.

The event’s proceeds go towards the nationally recognized non-profit organization Battlin' BBQ that provides relief for families whose children suffer from cancer.

“The proceeds go directly to the family selected to sponsor at each event. There are many programs to help with medical bills but it’s the immediate financial impact that can burden a family,” said Carmichael.

In addition, the barbecue cook off will have a steady groove of live music entertainment, raffles with amazing prizes, food trucks, a horseshoe competition, and Premiere Event Wrestling.

“This is the community coming together to help a family in need and to continue to help our community in many ways all while having fun,“ said Carmichael.

This event will benefit the family of Cayson Rodriguez from Ingleside.

Cayson Bryce Rodriguez was diagnosed with Acute Lymphoblastic Leukemia on Sept. 24, 2018. He also suffers from a condition called Tubular Hemimilia in which his right leg is significantly shorter than his left leg.

Cayson is a 6-year-old boy who has endured more than 25 blood transfusions and more than 40 platelet treatments.

Cayson has a huge heart and is a bright, funny and loving little boy who just wants to be a normal kid again.

Battlin' BBQ's IBCA Sanctioned Cook-off will be held at Simmons Park in Ingleside.

Barbecue teams will be competing in three categories: half chicken, pork ribs and brisket. There will also be competitions for best salsa and chef's choice.

During the event, they will also have a separate Jackpot Salsa and Jackpot Chef's Choice. These separate categories will be $20 per entry, cash only and can only be entered Aug. 3.

The Summer Sun Fun Run benefits a good cause

The inaugural SUMMER SUN FUN RUN is happening this Saturday!

Join Lazy Beach Brewery at 9 am for a summer-themed 5K & 2-mile FUN RUN/WALK. Bathing/swim suits are highly recommended but optional.

First place male and female competitors will receive some fun prizes and all participants will receive a stylish, high-quality t-shirt, run bib, and finishers award, according to their event page.

There will also be a summer themed costume contest with a prize at stake.

Some legendary rap/hip-hop icons will be performing in Corpus Christi this Sunday.

Hammer's House Party starts at 6 pm and goes until 11 pm.

UPDATE: Ticket's are currently sold out

Bridge Walk is back this Sunday

Every Sunday after Artwalk is Bridge Walk! Give your body and soul a break from the everyday struggles of life. Join the community in making the famous walk across Corpus Christi’s Harbor Bridge.

The views are always breath-taking as the salty Seawind whisps through the bridge. Bring a camera to take photos of the Corpus Christi Bay, Downtown, USS Lexington, and the Texas State Aquarium.

The Bridge walk goes down every month. Join in on the fun this Sunday starting at 8 am and ending around 11 am.

The Best Little Whorehouse in Texas at Aurora Arts Theatre

Over at the Aurora Arts Theatre (5635 Everhart Rd.), the cast and crew of ‘The Best Little Whorehouse in Texas’ have already opened to a string of sold-out performances.

This production is based on the true story of a legendary Texas brothel known as the Chicken Ranch, which operated from the 1840s to 1973. Protected by a friendly Sheriff and frequented by politicians, football teams and others, the Chicken Ranch thrived in the small town of Gilbert, Texas. Girls come from all over to work at the ranch and make a little extra cash. However, a crusading Houston radio commentator and his conservative audience eventually expose the Chicken Ranch, forcing it to shut its doors forever.

Tickets are still available for the August shows, which begin at 7:30 p.m. each Friday and Saturday, with Sunday matinees at 2:30 p.m.