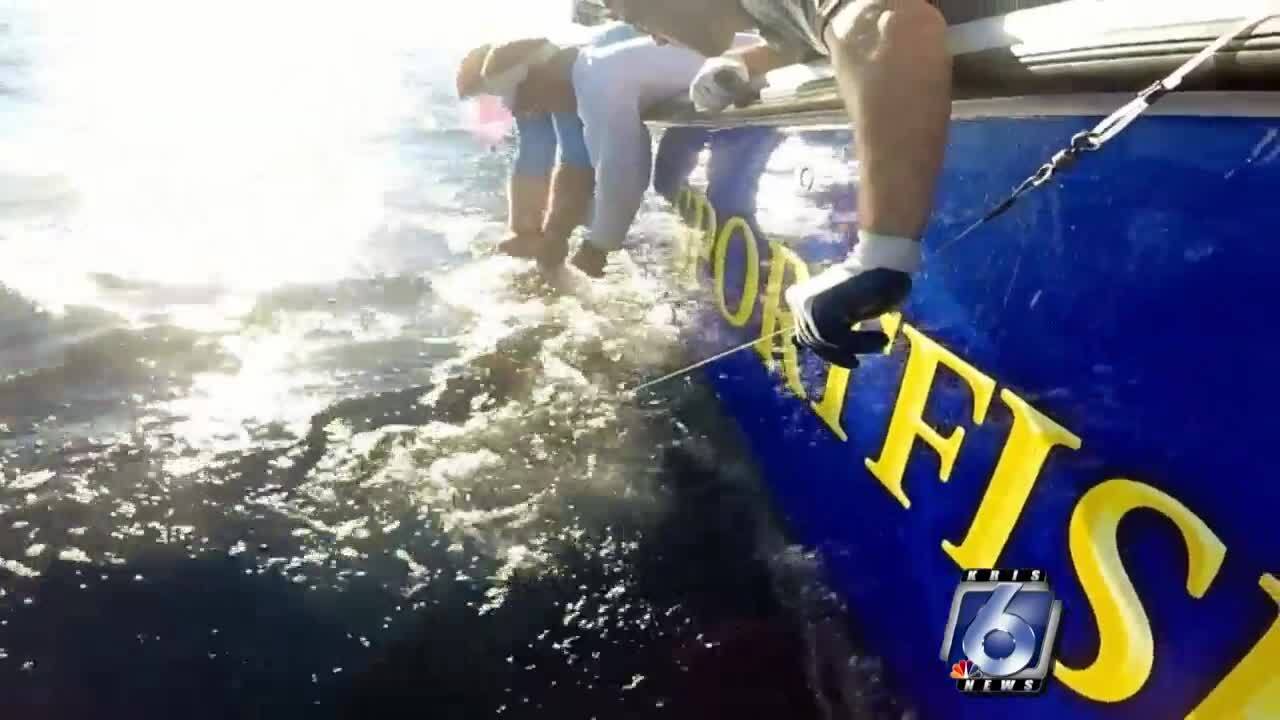 CORPUS CHRISTI, Texas — Scientists at the Center for Sportfish Science and Conservation at the Harte Research Institute for Gulf of Mexico Studies at Texas A&M University-Corpus Christi reached a milestone: They recently surpassed tagging more than 6,000 Gulf of Mexico sharks for conservation research.

They tagged bull, tiger and mako sharks; some longer than 11 feet. It's a feat it said it could not have done without help from Texas anglers.

Since 2008, scientists at the Center for Sportfish Science and Conservation have been tracking sharks in the Gulf of Mexico using special tracking tags, which it has led to great insight into migration patterns and habitats.

“The ultimate goal is to understand how these sharks are using their environment,” said Harte Research Institute graduate student Dr. Kesley Gibson. "When are they here off the Texas coast? Where are they going when they leave the Texas coast? How many sharks are out there? What species? What size are they? What age class? What sex? Just to get a good population dynamic information."

Scientists use two advanced tagging methods to estimate the survival rate of sharks: pop-up satellite archival tags that will remain attached to the shark and track its movements for one-to-two months, and acceleration data loggers, which will monitor underwater swimming behavior.

“So if it is a satellite tag, we can just get on the computer, and you can follow our sharks like we do at http://meetoursharks.org/ ," said Gibson. "If it’s the dart tag, so if one was tagged during the tournament, that tag has to be recaptured and reported to us."

The reality is that trying to catch and pull aboard one of the sea's largest predators takes money and lots of patience. That’s why, in 2014, the University teamed up with Sharkathon, the Corpus Christi shark-fishing tournament and Texas Shark Rodeo, a year-round fishing competition.

Beyond the data gathered, the tagging also allows fishermen to contribute to science.

“You are a scientist at that point; you are helping us collect data that otherwise we would not be able to collect," she said. "And you are telling us something about the resources that you are fishing and that you are using."

The big picture is all about keeping the oceans healthy. And the biggest misconception is that sharks are man-eaters.

“We are not on their menu, and sharks are just doing their thing everyday," she said. "Most shark bites are just a mistake or provoked by humans. We are in their environment; we are doing something we shouldn’t be doing.”

Scientists say this is extremely important because sharks are apex predators; they are the wolves of the ocean. Without them, we don’t have fish that we enjoy eating, and we have declining health throughout the ocean, even for species that might be indirectly affected by coral reefs. So they keep our oceans in balance.

Researchers plan to target popular inshore catches such as scalloped hammerhead, black-tip, bull, and tiger sharks, which have all shown to have varying levels of sensitivity to capture-related stress.

The Sportfish Center’s shark tagging and tracking program is the largest in the western Gulf of Mexico. Learn more by visiting SportfishCenter.org .