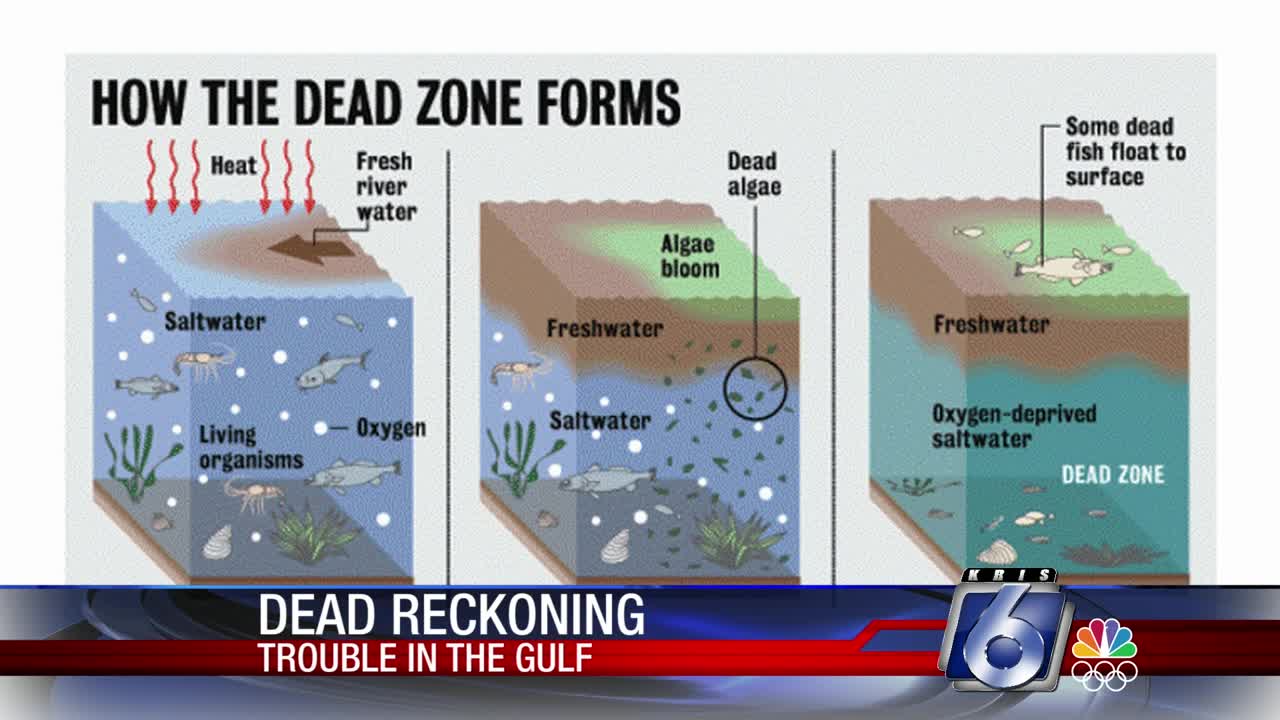 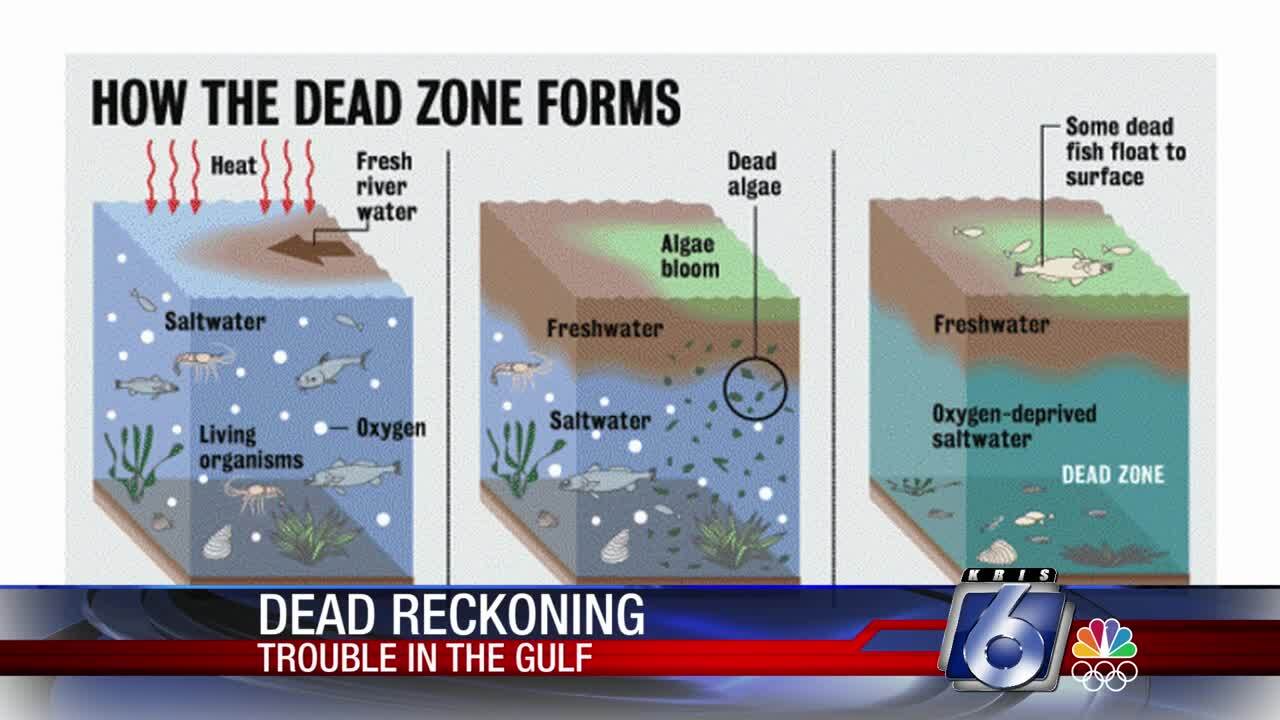 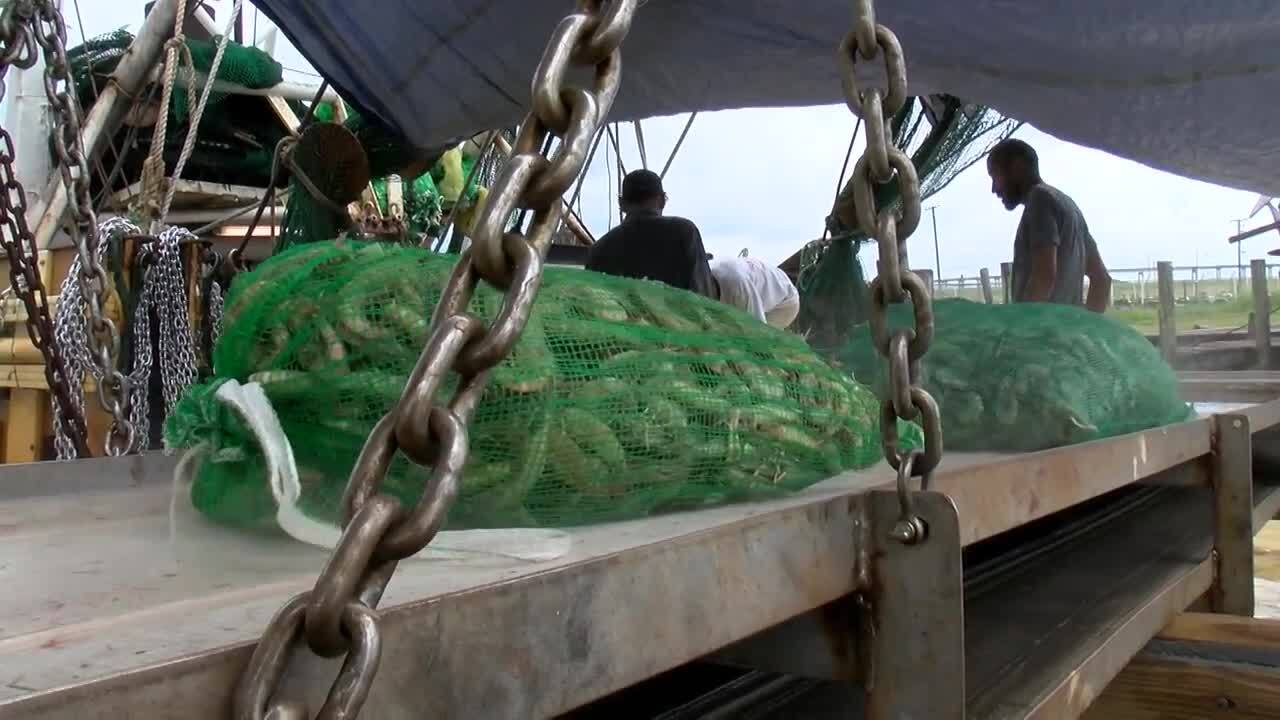 CORPUS CHRISTI, Texas — There is an area in the Gulf of Mexico where low-oxygen levels kill off marine life.

It's called the "dead zone," and Texas A&M-Corpus Christi’s Harte Research Institute has been monitoring the zone for years. The latest news isn't good.

"The more rain they're getting in the Mississippi, the more flooding -- it washes more nutrients down, primarily fertilizer, from the cornfields in Iowa,” he said.

The fertilizer makes its way into the Mississippi River via tributaries, such as Iowa's Yellow River. With heavy rains in the southeast having created what's being called historic flooding along parts of the Mississippi this year, that overflow is being pushed into the Gulf of Mexico.

The nutrients lead to plankton blooms. As plankton reproduces, it sinks and eats all the oxygen at the bottom of the gulf.

If the waters aren’t mixed, or diluted, by winds or other weather patterns, it creates a dead zone.

The more water the Mississippi sends into the gulf, the bigger the dead zone grows. In 2017, it covered an area of about 8,000 square miles, roughly the size of New Jersey. That was the largest dead zone ever recorded, but researchers fear this year’s flooding may send nutrient-laced water farther south, leading to an ever larger dead zone.

"Most of the upper-coast of Texas was in low-oxygen,” said McKinney. “If it gets bigger and bigger, it comes towards us here in Corpus Christi.”

A small dead zone exists in Corpus Christi Bay, though on a much smaller scale than the dead zone in the gulf. It's caused by nitrates and phosphorous in the run-off from Oso Creek.

Several coastal bend cities, such as Port Aransas, make their living on the vibrant gulf. But several local fishermen admit they don't know enough about dead zones to be concerned.

At least one, however, said they should learn -- and worry.

Montalvo said he’s worried about this year's floods, and believes if midwestern farmers don't change their methods, the entire Gulf coast is at risk.

"Probably not in my lifetime, but in my grandkids' lifetime you may see a huge dead zone in the Gulf of Mexico where they can't hardly fish," he said.