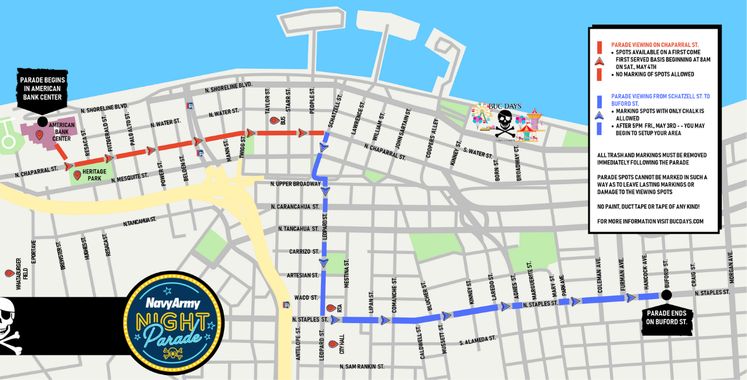 The Buc Days Night Parade has been a tradition since 1938. According to the Buccaneer Commission, the parade annually draws thousands of street spectators. There will be plenty of sights and sounds as local high school marching bands, various floats from various organizations, and loads of people from our community come together for one purpose: to have a blast!

The 82nd annual Navy Army Night Parade will be on Saturday night around 7. The parade route is different this year due to Harbor Bridge construction. Parade participants will start at the American Bank Center, then turn west onto Schatzell Street. Next, it goes up the bluff and continues west on Leopard Street to North Staples Street. One more turn will be taken at North Staples Street heading south on North Staples Street and ending at Buford Street.

All parking within the parade route along emergency lanes, detour routes, and other special areas will be prohibited.

Signage for parking restrictions should be up Friday and enforcement of these restrictions will begin at 3:00 p.m. on Saturday.

Of course, there are a few rules for Parade watchers to keep in mind.

*Consumption of alcohol is only allowed on Saturday from 8:00 p.m. to 10:00 p.m. during the parade, along the parade route. Police ask spectators to please drink responsibly so the parade is enjoyable for everyone. Officers will keep an eye out for incidents of public intoxication, including people who are drunk and disorderly.

Can’t make it downtown to watch the Buc Days Navy Army Night Parade on Saturday night? No worries. The parade also will be streamed live on KRISTV.com. We’ll have all the excitement and pageantry for you on KRIS 6. We will be there for the start of the festivities at 7 p.m. and continue until it finishes up at 10 p.m. Join all of your favorite KRIS-TV personalities as they watch the parade.