A Sanders Elementary School student had a scary encounter on Monday. CCISD Police tells KRIS 6 a woman approached a student near the playground on Monday afternoon. Police say the student was playing hide and seek with other kids, when the woman reportedly told the girl that she had permission from her parents to take her to a birthday party.

The student did not go with her, and when the girl’s mom showed up, she told her what had happened.

Incidents like these put parents and the community on high alert. Now, CCISD Police are warning about the importance of parents talking to their children about stranger danger.

“We want to make sure the community is fully aware so they can keep vigilent with us and help us keep our children safe,” said CCISD Police Chief, Kirby Warnke.

Chief Warnke says parents should remind their children to always be on the lookout. If a stranger approaches them, do not engage in conversation, and always tell a trusted adult about the incident.

He also recommends discussing code words, in case some someone you do not know tries to pick up your child.

“Mom and Dad can have some kind of code word system and say ‘hey, your dad told me to come get you.’ They say the code word, then you know it’s legit,” said Chief Warnke.

Chief Warnke also says it’s important for children to travel in groups to and from home, and to always let their parents know where they’re at.

He adds staff at Sanders Elementary School did the right thing by immediately alerting the community about what happened, and he hopes the community learned from this incident too. 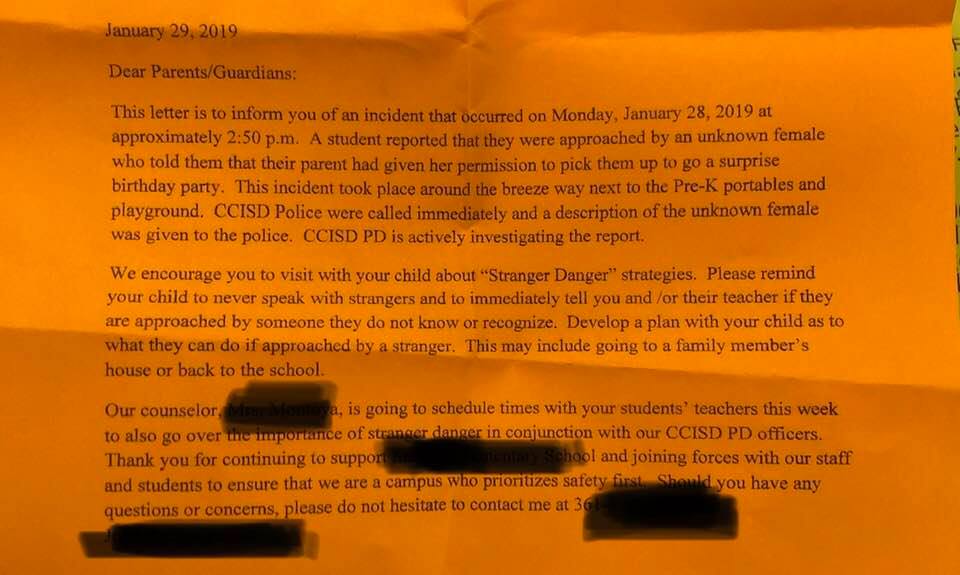 “Don’t communicate with our kids if you’re not their parent,” said Chief Warnke. “Don’t offer anyone rides. You’re just going to scare them and create an alarm.”

CCISD Police were called to the school immediately after the incident, and a suspect description was given to them. Further information about the suspect is not available at this time.