Local water infrastructure: Where do we go from here?

As part of our “Where do we go from here?” series we’re taking a closer look into Corpus Christi’s water infrastructure. We look into past water woes, current infrastructure and the future of this key resource.

Looking back to more than 10 years ago, there’s been at least 5 water boil notices issued by the City of Corpus Christi. The cause? Nitrification, which is a potentially hazardous process that occurs in our water system.

Gabriel Ramirez, Assistant Director of Water Quality and Treatment for the City of Corpus Christi said “We’re not a finished product. We want to make sure we maintain water quality the best we can and we know what’s happened in the past and so that’s helped us learn a lot of lessons.”

Those lessons learned, have been detrimental to our City and some of the most recent water woes have gained national attention like that of Environmentalist, Erin Brockovich.

In December 2016, Brockovich said “It’s so important at this point, that people be aware and vigilant and that the City communicate with them constantly and they stay out of the water and not use the water til further notice.”

Since then, major improvements have been made to prevent nitrification from happening again.

Those improvements include: Adding chlorine dioxide to the treatment process which adds a layer of disinfection to the water, changing the tank cycling program to prevent water aging for happening, getting rid of dead-end mains which are old and prevent the water from flushing and most importantly implementing a “nitrification action plan” which allows the City to take action immediately if they notice a change in water quality.

Ramirez said “We’re so proactive now that looking ahead I have plans for the next 25 years of how we can make our system better.” 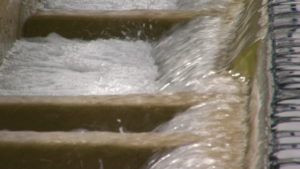 So how does the future of our water infrastructure look when it comes to our water supply?

Steve Ramos, Water Resource Manager with the City of Corpus Christi said “We are a wholesale water supplier for nearly 500,000 citizens in our Coastal Bend Community.” More than 325,000 of those are Corpus Christi residents and with a growing population our water supply from the 4 current water-based sources is sensitive.

Ramos added, “They’re kind of susceptible to droughts, to weather conditions and to the environment.”

Currently the City of Corpus Christi gets its water from: Lake Corpus Christi, Choke Canyon, Lake Texana and the Colorado River which was added when the Mary Rhodes Pipeline phases 1 and 2 were built.

Ramos saying that these supplies have strengthened the overall water supply. Adding “Currently, the City of Corpus Christi is working on a few different types of water supply strategies such as aquifer storage and recovery and we are in the process of a seawater desalination project.”

Seawater desalination which is the process of using ocean-water and removing the salt, has been a hot topic not only in Corpus Christi but around the World.

Hunter said “By having desalination, it’s an alternative. It’s not necessarily that they’re shutting off our water usage, it is an alternative source so that you can supplement for big businesses. So what better place to say the first ocean desalination in the State of Texas is the Coastal Bend and I can tell you, that is going to be a welcome sign for businesses around the country and world to come here.”

As for a time frame on when we can see a seawater desalination plant in our area, city officials say they’re already looking into plans but it could be another few years before construction could begin.