IWA honors sister who led creation of its school system

Incarnate Word Academy conducted a special mass to honor the sister who led to the creation of the academy.

In 1625, she established the Order of the Sisters of the Incarnate Word and Blessed Sacrament. The order of IWBS later founded Incarnate Word Academy.

It began in 1853 when a Catholic bishop from Texas went to France to recruit sisters from IWBS. to help establish the first Incarnate Word Academy in Brownsville. That campus was the first IWA. in the Americas. Now, IWA has campuses in Houston, Victoria, Cleveland and Corpus Christi, along with five campuses in Mexico.

IWBS Sister Marta O’Gara said it was exciting to be able to combine all of the Corpus Christi campuses for a special mass Tuesday morning to honor Sister Jeanne.

O’Gara said it was important for these students to honor the woman who helped create their school system.

“We remember her because God gifted her with the charisma of the gift of making Jesus better known in the world,” she said. “So, we’re committed to carrying on her mission and her call, which is to make Jesus present in our society.” she said. 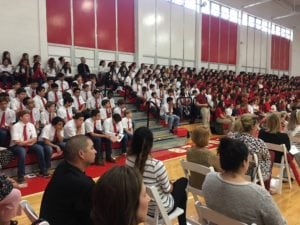 The students and staff also remembered those who died in the Sept. 11 terrorist attacks. A piece of rubble from the World Trade Center was displayed during the mass.