48 years ago this summer, Hurricane Celia blasted the Coastal Bend of Texas.

On August 3rd, 1970, Hurricane Celia made landfall near Port Aransas as a major Hurricane (category 3 on the Saffir-Simpson scale) with sustained winds of 130 mph.

Celia’s life cycle consisted of two rapid intensification periods, but most interesting was the explosive damaging wind gusts in the western semi-circle of the eye wall, in addition to the typical damaging eastern half of the center.

Hurricane Celia formed into a tropical depression in the northwest Caribbean Sea, west of the Cayman Islands, on July 30th 1970. The tropical depression clipped the northern portion of Cuba and became tropical storm Celia (winds greater than or equal to 39 mph) during the morning of August 1st when it entered the Gulf of Mexico. Celia quickly intensified into a major hurricane by late afternoon with sustained winds measured at 115 mph and a central pressure drop of 25 millibars (mb) over an 8 hour period. The intensification was brief as winds decreased to 90 mph during the morning of August 2nd (see map below). 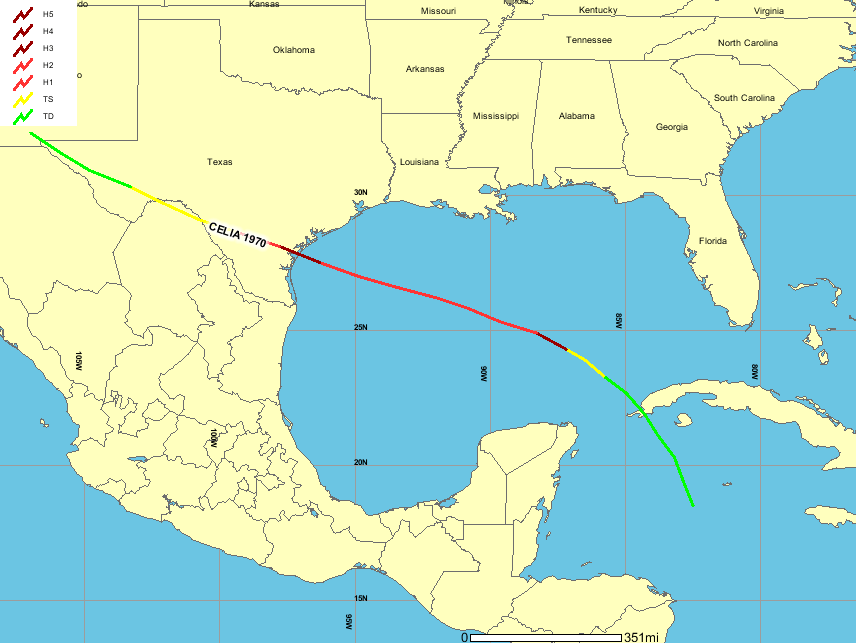 Although Celia remained on a west-northwest course, the forecast anticipated a turn to the right prior to landfall in Texas. Hurricane warnings were issued for the Upper Texas Coast during the morning of August 2nd. However, Celia stayed on track for a direct hit on Corpus Christi.

Hurricane warnings were issued on the morning of August 3rd for Corpus Christi for a high end category 1 or low end category 2 storm (90 to 100 mph sustained winds). For residents and visitors that waited, there was limited time to make proper preparations or evacuate before Celia made landfall.

Conditions worsened quickly as Celia underwent rapid intensification prior to landfall. The central pressure dropped 43 mb in 15 hours, plummeting to 945 mb or 27.89 inches of mercury (measured at Ingleside) at landfall during the afternoon of August 3rd.

Celia was a high end category 3 storm with sustained winds of 125 mph, measured at Corpus Christi International Airport and 130 mph at Aransas Pass. Hurricane Celia caused 15 fatalities in South Texas and 466 injuries. The tropical cyclone weakened down to a tropical storm by the time it reached interior Texas near Cotulla, but remained tropical storm strength as it passed Del Rio, producing a million dollars of damage to the city. Celia weakened to a tropical depression when it reached the Big Bend of Texas and remained similar intensity through El Paso Texas before weakening.

A persistent upper level high pressure system was over the southern Rockies eastward into the Southeast United States on July 31st (upper left quadrant below). When Celia moved into the southern Gulf of Mexico on August 1st (upper right quadrant), the high pressure steered the storm to the west-northwest. The forecasts at the time expected Celia to make a turn to the northwest and impact the upper Texas Coast. However, as seen in the lower right quadrant below, the high pressure did not shift to the east until the evening of August 3rd, when Celia was making landfall in South Texas. Celia moved northwest to about El Paso Texas when it was a tropical depression by August 5th.