“Homecoming: A Film by Beyoncé,” premiered on Netflix early Wednesday and was accompanied by a surprise album release which is now available on all streaming services.

Beyoncé made history as the first African-American woman to headline Coachella Valley Music and Arts Festival in 2018. Millions of fans are referring to the two-weekend performance as “Beychella.”

Rolling Stone reports that the Netflix concert film is “interwoven with intimate footage from the months of rehearsals it took to not only re-train her body post-pregnancy but also to see her complicated vision come to life.

“While the behind-the-scenes footage is only a fraction of the total film, Beyoncé is refreshingly candid about the hard work that it took to put the shows together.” 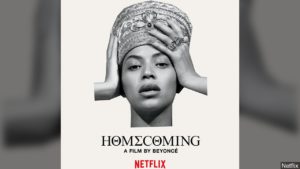 “Homecoming: The Live Album”  features tracks from the historical performance including top hits “Single Ladies,” “Love On Top” and “Crazy in Love.”

The album also features former bandmates Kelly Rowland and Michelle Williams, J Balvin, her sister Solange, her husband Jay-Z and their oldest daughter Blue Ivy who emulates her mom’s rendition of the classic hymn “Lift Every Voice and Sing.”

This hymn is often referred to as the Black National Anthem and is one of many aspects of the show meant to highlight the impact of the Historically Black Colleges and Universities (HBCU) experience.

This experience is what inspired the Homecoming theme.

The New York Times reports that “though Beyoncé did not attend college, the Houston native explained that she would visit Prairie View A&M University, rehearse at Texas Southern University and “always dreamed of going to an HBCU.”

Her father, Mathew Knowles, went to Fisk University in Nashville. “I wanted it to feel the way I felt when I went to [the HBCU marching band showcase] Battle of the Bands,” Beyoncé explains of the Coachella set, “because I grew up seeing those shows and that being the highlight of my year.”

This isn’t the first time Beyoncé has stunned fans with a surprise drop.

She has mastered this technique over the years releasing other albums  “Beyoncé” and “Lemonade.”

What will she do next?