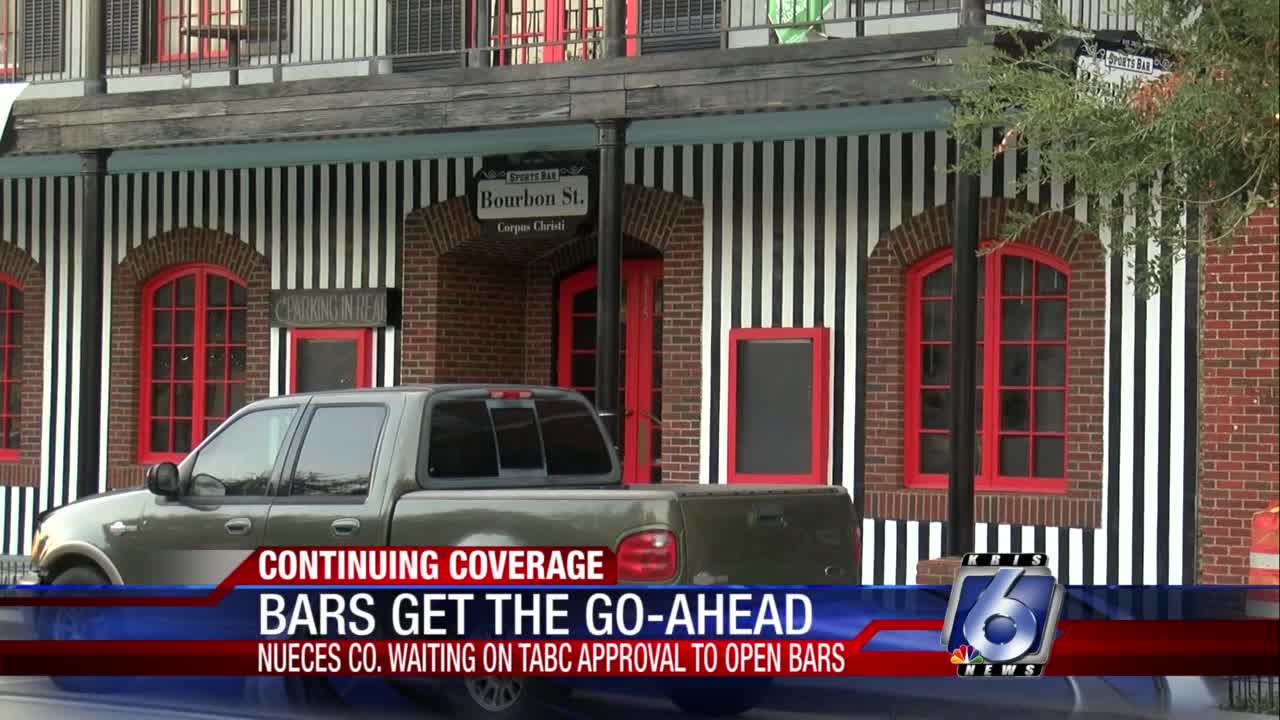 Nueces County get go-ahead from judge, wait on TABC

Gov. Greg Abbott's announcement last week that bars could reopen Oct. 13 was dependent on local officials signing off on the move. Canales said she has taken the steps needed to allow county bars to reopen.

Lauren Buxkamper turned 21 last month. She's looking forward to the announcement that bars will be able to reopen without having to double as restaurants.

“That’s even more exciting to me," she said. "I know a lot of bars were carrying cheesecake which is very odd to have in a bar. But I’m excited to see.”

This is welcome news for bar owners and managers in Port Aransas, who said they might not make it through the winter months because they were forced to close during lucrative summer months.

Many were frustrated Wednesday afternoon that they hadn't heard word about their fate.

"She should have already done it," said Texas Red's Riviera Manager Renee Garland. "I think it should have been done immediately. The ones that opted it did it immediately. They were like 'yes, we are ready.' For her not to say anything is holding people hostage -- she's just dragging her feet in my opinion "

For bars to be able to reopen, Canales said in a statement, that the TABC must grant her request to "opt in," calling the protocols to do so "stringent."

After taking the time to consult with different groups such as the TABC, law enforcement and local restaurant and bar associations, she said she feels confident in applying to reopen local bars.

"I do understand the protocols," she writes in the statement. "They are stringent. The protocols for opening a bar under the revised rules are strict and require space for social distancing, adding physical barriers, customer seating and other adaptations. In short, they require a bar to operate much more like a dine-in restaurant."

She said the TABC's decision will then put the decision in the hands of bar owners, and those who may violate the current rules will be dealt with so as to not affect others.

"I believe that there are bar owners who will choose to open under these rules and do so safely and responsibly," she said. "Some will decide that they cannot adapt their bar to comply with the rules and will remain closed, which is also a safe and responsible decision. For those who choose to open but do so in an unsafe and irresponsible manner, there will be harsh consequences."

She said she will make an announcement when TABC grants the request.

Meanwhile, the bar owners and managers wait. 361 Bar Manager Steve Morales said he feels bars have been targeted for blame when it comes to the spread of COVID-19.

"I see the restaurants are full and they are all doing really well," he said.

Garland is just ready to get behind the bar and do her thing.

"We all want to go back to work and earn our own living," she said. "We're tired of living on the government bill."