A barge, sunken boat and two jet skis have been sitting in the bay for the last three weeks. The vessels are behind homes on the 4100 block of Ocean Drive.

A concerned resident nearby contacted us early Thursday morning, sparking an investigation by the U.S. Coast Guard.

They sent an Oil Spill Prevention and Response Officer from the Texas General Land Office to ensure there were no hazardous chemicals in the water. The response officer told KRIS 6 News that there are currently no spills or environmental concerns. 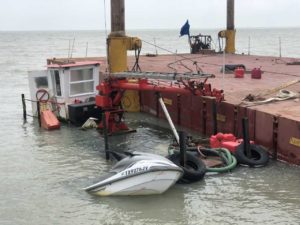 The gasoline and batteries were removed from the sunken boat to prevent any possible issues.

The barge initially arrived in that spot on May 10. At that time, it was donated to be used for a local charity event to shoot off fireworks.

The charity event occurred on property owned by the Diocese of Corpus Christi on Ocean Drive. Due to some weather and mechanical issues, the fireworks show was postponed.

The barge and small boat were left in the water behind that property along with multiple jet skis. They have remained in this very spot for three weeks.

The non-profit organization says they have been trying to contact the individual who donated the barge over the past few weeks but their phone calls have not been answered.

The General Land Office has contacted the individual who donated the barge. He says that the winds have been too high since the sinking to move his barge. According to him, winds must be under 20 mph for the removal.

A serial number on the barge led us to a Houston-based company named Flexifloat, who are listed as the owners and manufacturers of parts of this barge.

According to Flexifloat, they have been trying to get in contact with the contractor who rented this barge from them. They have not been paid for the rental and want their barge back.

According to the General Land Office, the barge will be removed Friday morning with the help of the Coast Guard.