Heavy rains stranded some Flour Bluff residents in their homes.

Resident Jeff Wolda says that he’s about six feet tall and when he went outside to his back yard, the flooded water came above his waist.

He’s had flooding before, but he says not this bad.

The captured video reveals the aftermath of the latest heavy rain, flooded streets, and drenched yards; it is a shocking scene, but now it is no surprise for Wolda.

“West from the East everything slopes down towards my house and, anytime we get any rain at all now it ends up in my yard and it’s a river, absolute river in my yard,” says Wolda.

These buildings sit on a slope that now sends any rain downhill toward his neighborhood.

A spokesperson for the Flour Bluff Independent School District says, they are aware of standing water and that it should be expected from the morning heavy rain.

FBISD also says “All District construction is designed and engineered for proper drainage.” 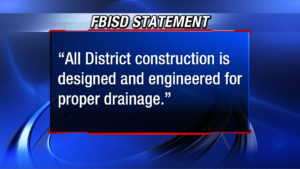 “If it gets on top of that culvert, that’s it. The water stops draining and it’s not much of a drain but it’s all we have,” says Wolda.

Wolda also says the water that flows downhill sometimes has nowhere to go because of debris that covers drains.

At times he would have to walk through the flooded water to remove that same debris.
Wolda along with other neighbors hope a solution to this problem will come sooner than later.