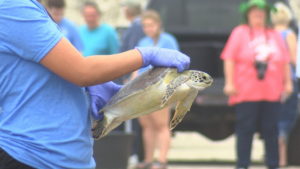 A handful of sea turtles gave a pleasant farewell as they were released back into the Gulf of Mexico to make their way home.

Many stood by to see these sea turtles that were spotted or washed up on land to go back to their own habitat.

Some of these sea turtles were found tangled in fishing lines, others had even been hit by a boat. 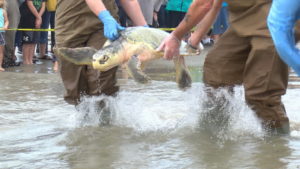 Fortunately, these sea creatures were rescued and housed at the Amos Rehabilitation Keep (ARK).

Workers with the ARK had to look for a few signs to determine if these sea turtles were ready to be released.

These included making sure the sea turtle had the ability to eat on their own and that they could move without issue. 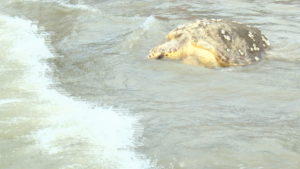 ARK officials say this was a unique turtle release because of three different species involved: the Kemp’s ridley’s, the loggerhead, and green sea turtles were all let go back into the gulf at the same time.

“We bring these turtles in, we make sure they’re able to eat and dive. But at the end of the day being able to release them back from where they came from, is what makes it all worth it,” says Jace Tunnell, director of the University of Texas Marine Institute.