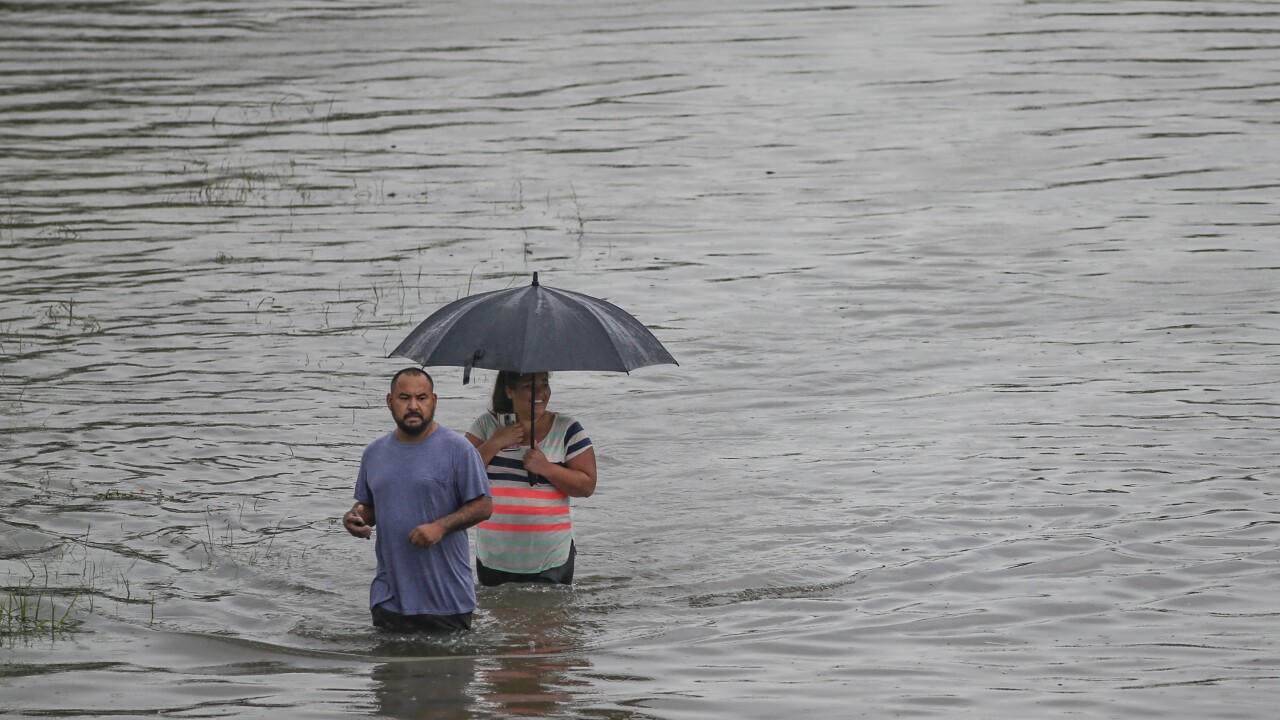 HOUSTON, TX - SEPTEMBER 19: People walk the flooded waters Hopper Rd. on September 19, 2019 in Houston, Texas. Gov. Greg Abbott has declared much of Southeast Texas disaster areas after heavy rain and flooding from the remnants of Tropical Depression Imelda dumped more than two feet of water across some areas. (Photo by Thomas B. Shea/Getty Images)

HOUSTON (AP) — Kids were still in classrooms as roads around them became rivers. Drivers warned to stay off highways wound up abandoning their submerged cars. Thousands of people called 911, but rescue crews found many weren't in real danger.

Waters from Tropical Storm Imelda began to recede Friday, but not before grinding life to a flooded halt for the more than 5 million residents of the Houston area. It was another test of catastrophic weather for an already storm-scarred stretch of Gulf Coast, and like past disasters, the response didn't escape second-guessing.

Imelda was no Hurricane Harvey, which killed dozens of people in Texas in 2017. But the storm was still one of the wettest tropical cyclones in U.S. history, dumping more than 40 inches of rain near the Louisiana border. Hundreds of people were displaced from their homes, and authorities say at least four people died.

Emergency officials said their preparations paid off and that the scars of Harvey were fresh on their minds. But still fuming in Imelda's soggy aftermath are parents whose children had been in school while the storm unleashed torrential rains.

The Houston Independent School District — Texas' largest with more than 200,000 students — defended the decision to not cancel classes Thursday, saying in a statement the weather "unfortunately took a turn that was unforeseen" despite being in regular contact with officials and the National Weather Service.

That resulted in parents venturing out into water-swollen streets to pick up their kids, and at two elementary schools, firefighters used high-water rescue vehicles to shuttle students out of flooded parking lots.

"There were a lot of angry moms out there. It was chaotic to pick up, the traffic was just horrible," said Rita Martinez, 31, who has three sons in the district. "We had the mayor coming out, 'Don't go out if you don't have to go out.' Parents, we had no choice."

The anger is familiar in a city that is accustomed to heavy flooding and the sight of submerged cars on usually congested interstates. Houston Mayor Sylvester Turner had pleaded with residents to stay put in the nation's fourth-largest city and spare the city's inundated 911 operators — who received more than 1,500 calls — by dialing only in cases of life-threatening emergencies.

But commuters who didn't heed those warnings still choked congested highways, and Turner said a number of calls the city received were from people who were inconvenienced but dry.

Officials in Harris County, which includes Houston, said they are now working with the federal government so residents get warnings pushed to their phone during severe weather — regardless of whether they've opted in or not.

"The challenge is when folks see rain not hitting us hard, they assume we're out of the woods. That's why our message consistently was, 'We're not out of the woods yet,'" said Harris County Judge Lina Hidalgo, the county's top administrator.

In Chambers County, where officials estimate about 800 homes and businesses sustained damage from floodwaters, Sheriff Brian Hawthorne on Friday used an airboat to rescue two zebras from a hunting ranch that were stranded in floodwaters.

"Just amazing, literally an alligator swimming in the same water as the zebras," he said.

The sheer amount of rain caught the county off guard — Hawthorne said they had only been expecting a third of the rain that Imelda brought. He called Imelda worse than Harvey but said he moved faster this time to deal with the effects.

"We got a lot more accomplished yesterday a lot quicker just because we had been through the Harvey experience," he said. "I didn't wait for the state to ask me if I needed anything, I started making phone calls earlier."

Climate change is making intense storms even more frequent, a fact not lost on protesters who rallied in Texas as part of a "Global Climate Strike" aimed at world leaders. Scientists say climate change is responsible for more intense and more frequent extreme weather such as storms, droughts, floods and fires, but without extensive study they cannot directly link a single weather event to the changing climate.

"I also have family in Houston and they were forced to go to school yesterday and they had to evacuate at some point because the school was obviously over-flooding," said Sofia Chavez, 12, an eighth-grader who rallied outside the Texas Capitol. "And it just worries me that I have family that's really important to me struggling with these kinds of things, and no one is really caring."