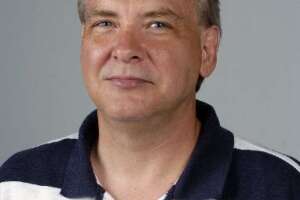 Tim Griffin has been a journalist for nearly 38 years working at a variety of newspapers and websites.

He joined KRIS in July 2018 after working with the Cox Media Group in Atlanta. Before that he worked more than 30 years at the San Antonio Express-News. He also was the original Big 12 blogger for ESPN.com and started the Spurs Nation blog for the Express-News.

During his career, Griffin has specialized in sports but also won numerous news reporting awards. He
has covered all six trips by the San Antonio Spurs to the NBA finals, 14 national football championship games, five Final Fours and other major events. He has been honored nationally and regionally for his writing and enterprise work and was a former national president of the Football Writers Association of America.

He is a graduate of the University of Memphis and is married with a son. He lives with them and their rescue dog in Corpus Christi.