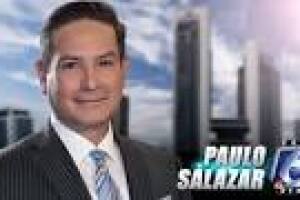 Paulo Salazar joins the KRIS 6 News Team to Anchor the 5 p.m. and 9 p.m. Newscasts and will cover feature stories for KRIS 6.

He joins us from Tallahassee’s ABC affiliate WTXL ABC27, where his served as the stations Primary Evening Anchor.

Before making his way to Florida, he spent 6 years in Columbus Mississippi bringing the latest news to the Golden Triangle area. During his time with WCBI News in MS, he performed a number of duties including Senior Reporter, Weekend Anchor and ending his time as the stations Primary Morning and Noon Anchor.

Paulo earned his Bachelor’s Degree in Broadcasting from Mississippi State University and is proud to be a Bull Dawg.

He’s a Texas native born in Corpus Christi but raised in San Antonio. After being away from the Lone Star state for almost 18 years, Paulo is glad to have made it back to the place he calls home.

Paulo has spent over a decade as a journalist and enjoys bringing the community he serves the latest in Breaking News and the stories impacting those around him.

If you have a story idea for Paulo you can email him at paulo.salazar@kristv.com or reach him on FACEBOOK at Paulo Salazar KRIS 6 News.