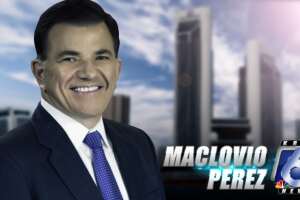 Maclovio Perez is the broadcast meteorologist for KRIS 6 News at Sunrise. Know as “Mac” by friends and viewers, he’s backed by 30 years in broadcasting. He began in radio in his hometown of McAllen, Texas.

As a student at the University of Texas at Austin he moved into television reporting. He earned his degree in Journalism. After filling in on the weather segment, the audience response was so positive that management assigned him permanently to the weekend weather slot.

Maclovio spent his first semesters at Texas A&M College Station studying meteorology but was quickly offered a TV weather job in San Antonio. Mac completed his studies in Meteorology at Mississippi State University and is continues working on his Master’s degree in Geosciences.

After 5 years as “the number one weatherman” in San Antonio, Mac was recruited by KCBS TV in Los Angeles. Mac spent 16 years on the air in Los Angeles becoming a household name in Southern California. In addition to his weather duties, he provided for environmental reporting, public affairs programming and hosted a children’s game show for 8 years.

Maclovio returned to Texas in 1997 having worked here in the Costal Bend and in San Antonio. He began with KRIS in 2013.

Mac has racked up a wall of awards during his career. He received an award for his “Innovative Smog Reporting” by the Air Quality Management District to and an award for “Outstanding Broadcasting” by the Texas Farm Bureau. Maclovio has always been active in community affairs serving as public speaker at numerous events.

Maclovio is married to his high school sweetheart, Frances and they have 4 children.