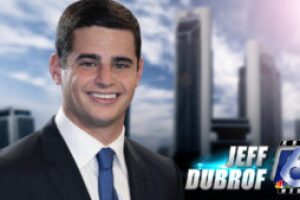 Jeff Dubrof joined the KRIS 6 News team as the Weekend Sports Anchor/Reporter in August of 2018 and was born and raised in San Antonio, Tx.

Jeff graduated from the University of Southern California (FIGHT ON!) in May of 2018 where he majored in Broadcast Journalism and minored in Sports Media Studies. Jeff was involved in many student media outlets at USC; serving as a sports anchor for the school news and a news reporter. He also worked with the student radio station where he hosted his own talk show and also announced the 2017 Rose Bowl Game between USC and Penn State. Jeff also interned at Fox Sports 1 as a production intern.

He is an avid dog lover and has three bulldogs (2 English, 1 French) at home. He is a fan of all sports and will gladly watch the most random sporting event he can find on TV.

If you ever see Jeff, feel free to say hello to him and give him a hot sports take to discuss. He is looking forward to telling your stories and is very happy he is back in Texas, especially in a great city like Corpus Christi.