A stroke is one of the most catastrophic experiences an individual can experience.

Strokes often cause temporary or permanent paralysis on one side of the body. Balance, memory, speech, cognition and vision may also be affected. 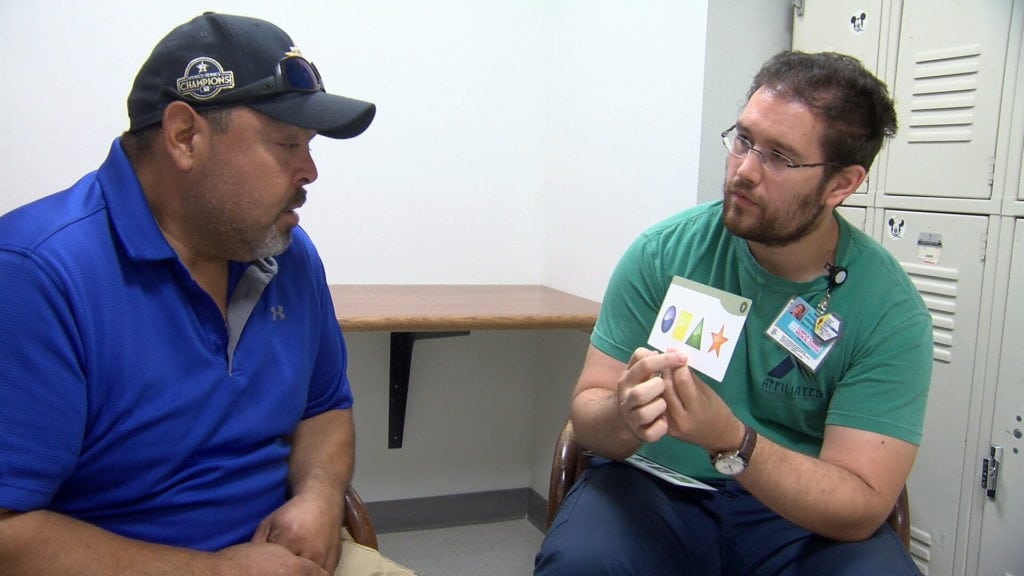 One of the most serious complications of a stroke is the ability to communicate afterwards.

In late July, Edward Garza Jr., found himself trying to do just that…communicate.  The 48-year-old had just underwent a surgical procedure for a kidney stone and then had to later return to the emergency room due to the pain.

Researchers found that those diagnosed with kidney stones have a 40 percent increased risk of having a stroke.

“They said the good thing was that I was in the hospital where they could do whatever they needed to do to get me here today,” Garza said.

People who survive a stroke are often paralyzed or have problems with speech and cognition.

“My speech therapist would spend an hour to an hour and a half a day,” Garza said. “After the session was over, he would tell me what I needed to work on, and my wife and I would work throughout the night.”

The goal of stroke therapy is to assist the victim to obtain as much function as possible.

“Some people just need a little help; a couple of days will get the job done, and other people, they come in for therapy after they have been discharged from the hospital to continue that work, ” Morin said.

After his rehabilitation, Garza is pleased with his recovery.

“I feel awesome,” he said. “With the support system that I have with my family, my friends, they helped me get where I am at today.”.

Communication problems are very common after a stroke. About one-third of stroke survivors have problems with speaking, reading, writing and understanding what other people say to them.

Why do they happen?

When we communicate, our brain has to complete a series of tasks. Different parts of our brains are responsible for each of these tasks. If one of these parts is damaged by a stroke, it can cause problems with communication.

What kind of communication problems do people have?

Most communication problems eventually improve, but it’s difficult to predict how much they’ll improve or how long it will take, as it’s different for everyone. Problems tend to be worse in the first few weeks and will improve  within the first three to six months. However, people continue to recover for months or years.

For most people, getting better is about returning to the way they were before their stroke. Being able to speak again is particularly important.

But even if you don’t recover completely, there are many ways to communicate that don’t rely on speaking. Lots of stroke survivors continue to live full and happy lives, although they still have problems with communication.

Are there treatments that can help?

Communication problems can be treated using speech and language therapy.

A speech and language therapist can help victims to improve their speech, reading and writing as much as possible.

They can also help them learn other ways to communicate. These are known as compensation or coping strategies. They include anything from gestures to electronic devices – anything that can help them communicate.

Any communication problems should be referred to a speech and language therapist for an assessment. Using the results of the assessment, the therapist will set up regular therapy sessions. This may start in the hospital, or be arranged after release.

Speech and language therapy isn’t just about the time spent with a therapist. Communication improves with practice and the work outside of therapy sessions is as important as those sessions.