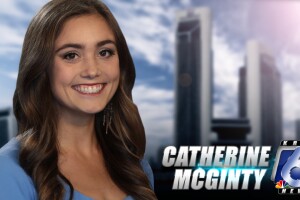 Catherine was born in Corpus Christi, but moved to San Antonio with her family when she was 4 years old.

Catherine decided she wanted to be a journalist in the fifth grade when she served as an anchor on her elementary school's morning announcements, Wetmore Rangers Television (WRTV).

Many years later, she attended Dallas Baptist University where she earned her Bachelor of Arts in Broadcast/Digital Media and played for the DBU Women's Soccer Team. Go Patriots!

During her time in Dallas, she was the sideline reporter for her university's basketball team and the Video Production Intern for Major League Soccer team - FC Dallas.

Catherine worked on the Hooks Production Staff during the 2019 season.

In her free time, Catherine loves being outdoors with her husband, Kevin, and rescue pup, Shipley, and adopted station cat Chaos.

She is thrilled to be back in Corpus Christi!